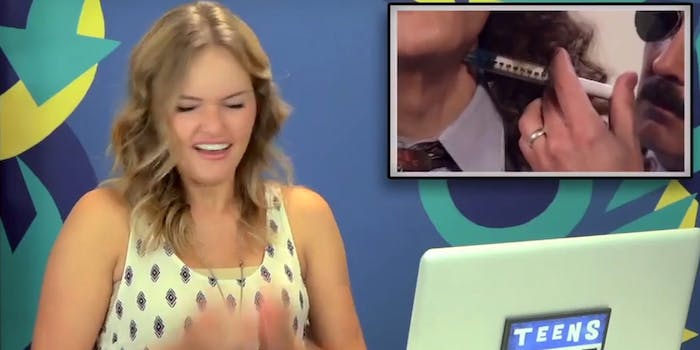 Teens love Weird Al, but they have no idea who he is

“Who dedicates a whole song to foil?”

“Who dedicates a whole song to foil?”

“I want to know what he’s thinking when he’s doing these songs.”

Teens—at least a representative sampling of them—do like “Weird Al” Yankovic’s song parodies. But in this short video, the kids are a little confused over 1) who exactly Weird Al is, 2) the revelation that he’s been around since before YouTube, and 3) why parodies are so popular.

In their new (or newly packaged) “Teens React” channel, ubiquitous YouTube producers the Fine Bros. create a (near) real-time barometer of teenage opinion on topics, trends, and all matters in-between. The series is often more accurate as a pop culture yardstick than any costly Zogby or Gallup opinion poll.

There is a beauty in the simplicity of the Fine Bros.’ approach. A dozen or so teenagers watch Weird Al clips and initially, well, react. There are a few looks of bewilderment. One enthusiastic young fan was introduced to Al Yankovic’s parodies through his older brothers. A pair of young teenagers are definitely not fans, looking puzzled and anxious for the clips to come to an end. Across this cross-section of teen opinion, most recognize Weird Al’s enormous skill—but there’s a mixed reaction to Yankovic’s song choices, and a strong sense of parody burnout. Spoofs of popular songs are a tired category on YouTube.

The ad-hoc teen panel seems split on the fact that Weird Al’s new album, Mandatory Fun, debuted at the top of the Billboard 200. The most honest reaction is from the young woman who said, “It saddens me.” Another teen was more philosophical, commenting, “It makes me wonder if, in a few years, parody acts will become more popular than the originals.”

The Fine Bros., a pair of Orthodox Jews from Brooklyn, are true YouTube pioneers (a term not easily bestowed on anyone), having garnered more than 1 billion views since their first video in 2004. “Teens React,” which launched at the end of July, is a dedicated channel that added subscribers at the rate of 500,000 as part of its launch and continues to grow at a rapid pace.  “React” is a theme that cuts across other Fine Bros. channels, including “Kids React” and “Elders React.” The new channel is a mix of existing and original content.

What makes “Teens React” work is its spontaneity. From the earliest TV days when the late Art Linkletter stuck a mike in kids’ faces and asked them questions that elicited “isn’t that cute” responses, the notion of using the precious minds of children to fuel programming has been a staple. The Fine Bros’ work resonates through their ability to be timely and honest and unfiltered.  Case in point: When asked, “Do you know who who Weird Al is?” this memorable response came forth: