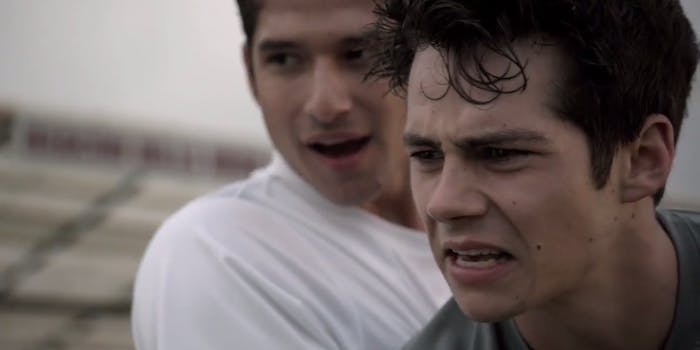 Fear not, Derek Hale is still allergic to wearing a shirt.

The trailer for season 4 of Teen Wolf is here, and it looks refreshingly un-traumatizing. Well, compared to season 3, anyway. There’s still a severed head rolling on the floor within the first 30 seconds.

After an angst-heavy third season, Teen Wolf is back on track with a few fresh faces—although the duo of new lacrosse players look kind of familiar: a chiseled Abercrombie & Fitch lookalike and his openly gay jock best friend, much like Jackson and Danny in the first couple of seasons. There don’t seem to be any new female characters in the wake of Allison’s death, although Kate Argent is back to scare the crap out of another generation of teen werewolves.

Other highlights include more weird monsters, Derek Hale inevitably losing his shirt for the millionth time (seriously, is he allergic or something?), and a creepy dude with no mouth.

The big question this year is “Who is the benefactor?” The trailer was first revealed to a select few fans at the end of an impressively tricky online scavenger hunt requiring fans to track down code words hidden across various social media sites. Luckily, Teen Wolf fans were dedicated enough to crack the puzzle, and a few days later, the rest of us plebes can watch the trailer, too.

There’s no word on who “the benefactor” might be, but we assume it has something to do with this season’s assassin theme. This mysterious character already has their very own teaser trailer, though.

It looks like this season is an intentional departure from the last, although whether that’s a result of the mixed audience reactions is anyone’s guess. In a new behind-the-scenes video from the main cast, Dylan O’Brien describes the second half of season 3 as a “tragedy,” while season 4 will be more “stripped down” and have a similar tone to season 1.

Tyler Posey says that the upcoming season is more of an “action/adventure comedy,” as well as being “slower-paced.” In any other teen show, a slower pace probably wouldn’t be something to brag about, but this feels like good news after the millions of hectic plot twists we saw during season 3.

Whatever happens, the first new episode airs on June 23, so we won’t have long to wait.