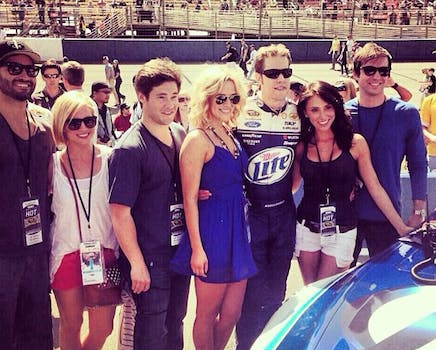 When a well-liked fan stumbled across the online archive of the photos Brittany Snow and heartthrob Tyler Hoechlin took together, she created a divide across the Teen Wolf fandom.

Pitch Perfect actress Brittany Snow recently celebrated her 27th birthday with a photo booth for her and her friends—including her boyfriend, Teen Wolf heartthrob Tyler Hoechlin.

But when a well-liked Teen Wolf fan stumbled across the online archive of the photos Snow and Hoechlin took together, she may have ruined the party for everyone and created a divide across the Teen Wolf fandom in the process.

Known for reblogging pictures from Teen Wolf, Glee, and other shows, Tumblr user stonesourwolf produced photos from Brittany Snow’s birthday party last week, ones which seemed to confirm the long-guessed-at relationship between Snow and Hoechlin. Fans immediately reblogged and edited them.

After stonesourwolf confessed that she’d gotten the pictures by guessing the password of a locked online photo gallery, concerned fans alerted Hoechlin, who lashed out on Twitter. 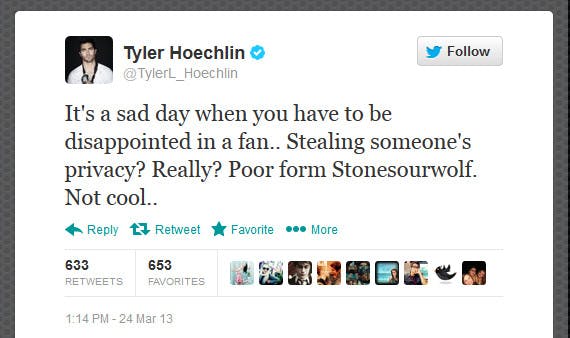 Perhaps he was upset because the pictures, while tame, weren’t exactly formal.

Upon realizing the photos were never meant to be public, many fans deleted their reblogs and edits of the pictures. “As cute as those pics are, i will not reblog or work with them until tyler or brittany put them somewhere public or say it’s okay,” wrote weasleysgranger on Tumblr.

Stonesourwolf responded by posting a message stating that it “took less than five minutes” to guess the password to the site at which the photobooth gallery was hosted. Her non-apology only stoked the controversy.

“I think she was completely in the wrong,” wrote savagepierce. “[C]elebrities deserve their fucking privacy. There’s a line, and she crossed it.”

The friend of Snow and Hoechlin who rented the photobooth for the party also felt guilty. Courtney Knowles of the Jed Foundation posted to his own Tumblr to clarify that the stolen pictures belonged to him and urge the fandom to remove them from the Internet:

“A couple weeks ago, I threw a bday party for a friend. I rented a photo booth for the guests to use. As the host, those guests counted on me to respect their privacy. I never dreamed that the photo booth company would be silly enough to make the private login searchable or that they’d make the password easy to guess. And I never dreamed that a Tumblr user called @stonesourwolf would break into that private gallery and post the pics.”

Most fans did as requested and pulled the pictures. However, when Hoechlin “outed” stonesourwolf as the source of the photos, many fans weren’t pleased. And when stonesourwolf ultimately deactivated her Tumblr after receiving a barrage of angry emails and comments, the fandom grew even more divided.

“What Stonesourwolf did wasn’t cool. But stating her url in a tweet just invites a lot of bullying and bashing,” wrote idaredyoubambi.

“A tumblr blog name is NOT publicly exposing,” countered derekleftstilesforme. “All he did by naming the blogs [sic] name was effectively shut it down. She had no personal photos and no personal information. Further more [sic] she showed no remorse for her actions so why should he care about her ‘privacy’.”

While many fans were taking sides, many more were declaring themselves ready to move on, like beaconhillslacrosse24:

You know what? I am going back to reading sterek now. I’m reading rly cute nerd!stiles jock!derek ok and I do not need this dramatic pointless bullshit. stonesourwolf and tyler were both wrong, and I am disappointed in both of them. The end.

To user trollfight, however, the blame for the fiasco was much larger than just one fangirl hacking an online photo gallery. “You are all partly complicit in this kind of thing because you salivate for glimpses into your favorite celebs’ lives,” they wrote.

Hoechlin went on to upload another, less drunk-and-embarrassing picture of himself and Snow on Twitter. For his “TRUE” fans, he said.

But, as he’s probably learned, what makes a “true fan” may be different for everyone.