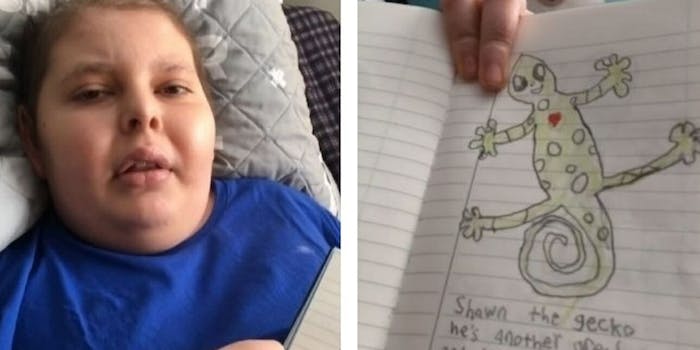 His channel will live on.

The 14-year-old terminal cancer patient who delighted YouTube by posting his artwork daily has died, according to a heartbreaking video from his parents.

Steven Sudell, whose nickname was Weev and who created Theweevster18 YouTube channel to showcase his artwork, had been fighting brain cancer. He last posted on Nov. 22, where he wished his fans a Happy Thanksgiving and showed off a drawing of Shawn the gecko.

Steven died on Nov. 28, and his parents uploaded a video on Monday saying they want to continue his legacy of positivity by keeping the channel active. “He still has a lot more art that he did that he wanted to show,” his mother said.

His parents—who referred to themselves as Mama Weev and Papa Weev—said Steven said he wanted the channel to continue after his death, and on Tuesday, they posted a prerecorded video in which he talked about how he was going to die because of his tumor. Yet, he still managed to try to comfort his audience.

“When the time has come, the YouTube channel can still be growing,” Steven said. “You guys should be hitting the like button and all. But remember, I’ll always be in your guys’ hearts. It’ll be OK. Don’t worry if I die. It’s going to be OK.”

Then, he gave his patented “Peace out” sign off for one of the final times.

Steven was diagnosed with cancer in April 2017, and though he underwent radiation and chemotherapy, the cancer came back last March. The Connecticut native had been at home in hospice since the summer, and less than two months ago, he created his YouTube channel and began uploading the drawings he’d produced.

His first video appeared Oct. 24, where he said, “This is a channel for people who want to see drawings and just, like, fun things.” After at least one of his vlogs began trending on Reddit, thousands of people began to tune in to his short videos, and as of this writing, more than 21,000 people had subscribed.

Steven redirected that support into donations, where he helped raise more than $24,000 for Make-A-Wish Connecticut and more than $17,000 on the Resilience Gives website.

Luckily for those who were touched by Steven’s words and his artwork, it sounds like there are more videos of him to be posted. His spirit is still very much alive.