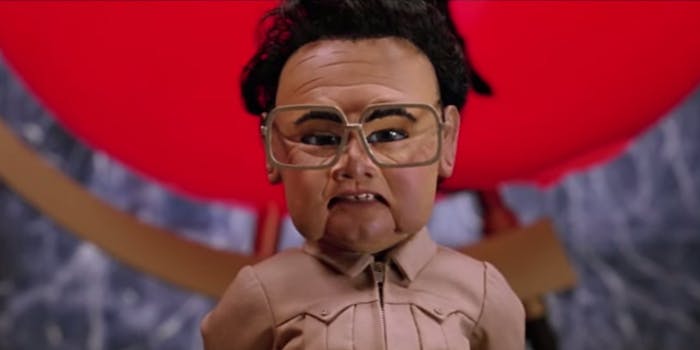 Terrorists, your game is through.

At least one theater was happy to ignore terrorist threats and screen The Interview in righteous protest—Sony hackers be damned. But even the Texas-based Alamo Drafthouse was unable to move forward with its plans to show the controversial film.

It did the next best thing, however. In lieu of The Interview, the Richardson, Texas-based Drafthouse will host a giant Team America: World Police party Dec. 27, complete with singalongs and, presumably, miniature American flags.

In case you missed it, the beloved, oft-quoted film is basically about North Korea attacking the U.S. and it’s told with puppets. The late Kim Jong-il is a bastardized villain portrayed with intentionally racist fervor—it’s supposed to be OK because he’s an evil dude IRL. But it is insatiably funny.

If you can’t make the trip to Texas, enjoy these memorable Team America clips.