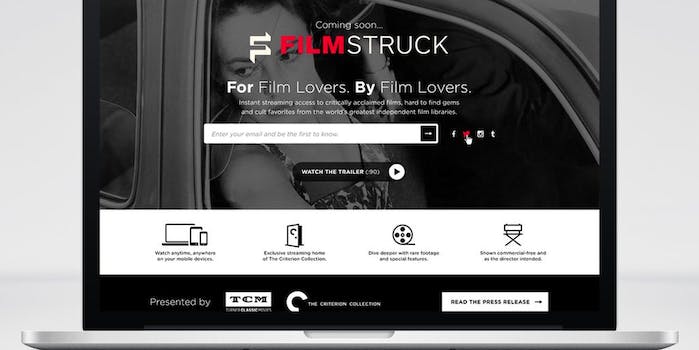 In a move sure to please classic film buffs, Turner Classic Movies and the Criterion Collection have partnered to start a new streaming service called FilmStruck.

It will be subscription-based, and according to a press release, will offer “a comprehensive and constantly refreshed library of films comprised of an eclectic mix of contemporary and classic arthouse, indie, foreign and cult films.”

Learn why we're so excited about @FilmStruck, a cinema lover's dream from @tcm & Criterion! https://t.co/i0UgVkr46E pic.twitter.com/07LPbgjVrf

Though no price point has been announced, the service already fills a gap in the streaming video market just by virtue of the fact that it features any older films at all.

As Flavorwire put it: “[Netflix’s] library is determined based not on curatorship or history, but on licensing deals. … As of this writing, they stream not one film directed by Alfred Hitchcock, Elia Kazan, or Frank Capra.” TCM and Criterion’s vast libraries can guarantee that will never be the case on FilmStruck, so even though it seems like there are a million streaming services flooding the market right now, this one may very well be the only one classic film lovers need.

The companies have only given “Fall 2016” as the timeline for their launch date, but they invite everyone to keep up with their progress by subscribing to their newsletter on the FilmStruck website.