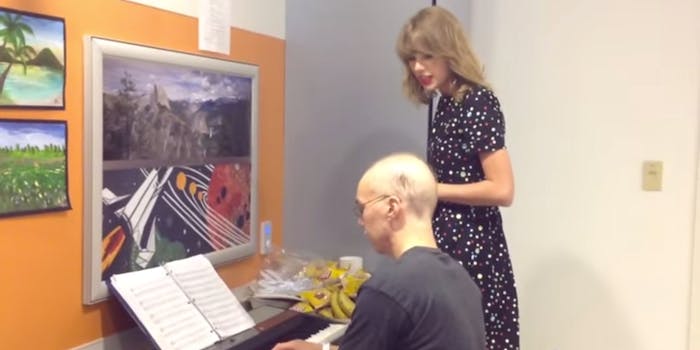 How Taylor Swift surprised a leukemia patient with an unforgettable duet

He had about a five-minute warning before she came to visit.

Taylor Swift’s shown that she’ll go out of her way for her fans. She’s crashed a bridal shower, made a surprise visit to one of her younger fans, and gone on Instagram commenting sprees to share words of encouragement.

Back in August, YouTube user SuperGlue65, who had leukemia, was at Boston Children’s Hospital while he recovered from a bone marrow transplant. When Swift came to visit, he had about a five-minute warning before she stopped in his room.

A month later, posting on Reddit, SuperGlue65 wrote about how it all went down.

He had a piano brought into his room to pass the time previously, which Swift noticed, and she asked him to play a song for her. What transpired was a sweet version of “Someone Like You,” and while they may flub a couple of times, it didn’t need to be perfect. It works just fine the way it is.

“She told me that she flew over from her Rhode Island home just for the purpose of visiting everyone in Boston Children’s Hospital (where I was staying),” he wrote on Monday night. “Apparently she spent around 3 hours visiting. I just think it’s so awesome and nice that she came especially for that purpose.”

How did it come about? “It was a spur of the moment thing,” he wrote. “She commented on the piano and asked if I played, and when I said, ‘Yes,’ she asked me to play something for her. The only song I knew with lyrics was this song, so I asked if she would sing along, to which she kindly obliged.

“She actually didn’t even bring anyone with her except her body guard (who stood outside the room). There were no cameras except the one my sister used to videotape this. Yes, she was awesome and definitely seemed to care!”