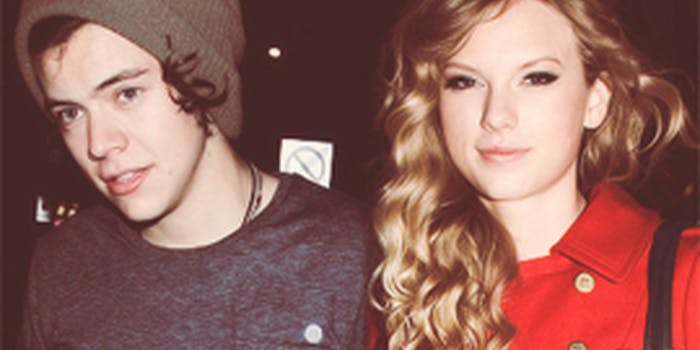 The 5 songs Taylor Swift will write about One Direction fandom

Now that the country-pop superstar is dating One Direction's Harry Styles, she's bound to collide with fans who believe Styles is in a secret relationship with bandmate Louis Tomlinson. Here are the 5 songs Swift will inevitably write about the experience.

If the rumors are true, Taylor Swift and One Direction’s Harry Styles are in a relationship. We’re torn about this at the Daily Dot. On the one hand, this might be the wake up call that finally gets through to those members of the fandom who fervently, passionately believe that Harry and bandmate Louis Tomlinson are in a closeted gay relationship (despite denials from the boys themselves).

On the other hand, we wouldn’t wish the reality distortion field that is the One Direction fandom on anyone, least of all Taylor “Why’d you have to be so mean?” Swift, balladeer for vulnerable teenage girls everywhere.

Rumor has it that Swift’s song “I Knew You Were Trouble” is about her first encounters with Styles. This morning, after rumors swirled around over the weekend, Good Morning America tweeted that, yes, the two were dating.

The hornet’s nest Swift and her fans, “Swifties,” may have walked into is largely focused around endless amounts of tension surrounding “Larry Stylinson” shippers—“Larry” being a portmanteau of Harry Styles and Louis Tomlinson), and shippers being fans who really, really want to see two people get together.

For most members of such slash (male/male) fandoms, this perfect union only happens in the imaginations of the people who ship it. But in the One Direction fandom, most of the Larry shippers, who seem to number in the hundreds of thousands on Tumblr and Twitter, are convinced that Harry and Louis are actually a couple.

As part of the meticulously detailed mass conspiracy that fans have evolved to aid their belief in Harry and Louis’ great secret love, Larry conspiracists, or “tinhatters,” insist that Louis’ girlfriend Eleanor Calder must be a beard, a deceptive front to help keep Harry and Louis’ “real” relationship from becoming public. Many of them routinely send Calder insults on Twitter and Instagram for her part in allegedly helping to keep the two bandmates apart. Now that Harry/Taylor, or “Haylor,” is starting to look like a reality, the insults are beginning to roll in for her too—from every corner of the fandom, not just the Larry shippers.

But if there’s one person the Larry tinhatters would have a hard time rationalizing their “beard” theory with, it’s Taylor Swift, who, apart from being a public celebrity herself, tends to couch all the gruesome details of her relationships in the song lyrics for her next album after she’s said goodbye. As a conspirators’ choice for keeping things under wraps, Swift would be the absolute worst.

Swift’s relentlessly heteronormative pop-country ballads would be the perfect complement to  the tinhatters’ relentlessly homophobic insistence on reading everything Harry and Larry do, say, and wear as being “gay.” Not to mention, Swift already has song lyrics where she jokes about telling all her friends her ex is gay. The whole scenario feels like the setup for an unsubtle afterschool special about tolerance—or perhaps like a country song aimed at teenage girls and horrible ex-boyfriends.

So, what will Swift’s next album look like if she breaks things off with Styles? Probably something like this:

The Top Five Songs Taylor Swift Will Inevitably Write About One Direction Fandom:

1)  “Wrong Direction.” Although we know Taylor Swift reps for fans everywhere, we still hope she’ll dish out the scathing invectives the people already sending her death threats so rightfully deserve.

2) “Third Wheel.”  If the Larry fans get lucky and Styles and Tomlinson actually do ever come out of the closet, it’s a certainty that Swift’s poison pen will have plenty of snarky lyrics to write about becoming an accidental beard.

3) “Time to Jump Ship.” In the event that Swift and Styles get serious and stay together for a while, she’ll have to put up with the kind of regular insults that will make her entitled to a little gloating at the expense of fans who “ship” her and Styles with other people.

We hope she doesn’t!