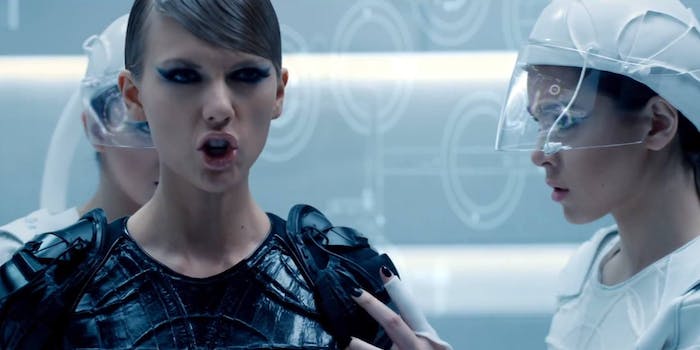 Can you spot every movie reference in Taylor's new Sin City-style video?

The many posters for Taylor Swift‘s “Bad Blood” video made it look a lot like Sin City, but it turned out to be way geekier than we were expecting.

The video sees Swift and a posse of female friends gear up and go into battle in a sequence that includes references to The Hunger Games, Tron, The Fifth Element and maybe even Pacific Rim. (We’re pretty sure that was a cameo from the Pacific Rim mascot dog in the locker room scene, but we can’t be sure.)

The celebrity cameos in “Bad Blood” are off the charts. At this point, if you’re an almost-as-famous-as-Taylor-Swift starlet and you weren’t in this video, it probably counts as a snub.

This is what The Expendables would look like if it starred cool young women instead of elderly dudes and had far better outfits. More action movies with all-female casts, please.