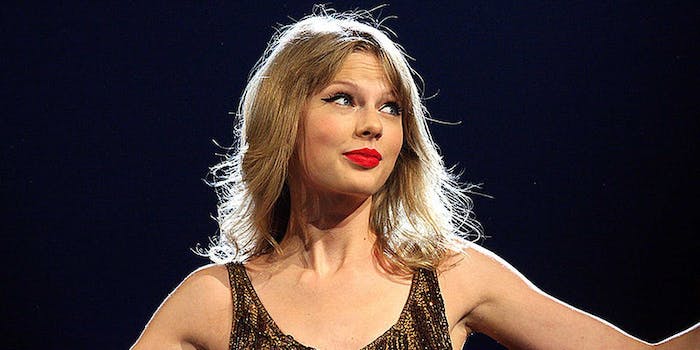 Finally, someone made the connection.

There are two types of music fans. There are the ones who got really excited when seminal electronic artist Aphex Twin dropped Syro, his first album in more than a decade, earlier this year. And then there are the ones who were incapacitated with excitement when Taylor Swift‘s album 1989 leaked online last week.

It would be easy to say that people in the former camp are connoisseurs of challenging, genre-defining music that blends the aesthetics of electronica with the sensibilities of 20th century classical music in a way that’s left an indelible imprint on a diverse array of artists from Radiohead to Skrillex, whereas people in the latter camp are hella basic.

But it would be even easier to shut up and stop being so snobby because both T-Swift and Richard D. James (the man behind Aphex Twin’s glitchy drums and swirling synths) are both awesome.

Recognition of this dual awesomeness was behind the decision by postmodern Renaissance man David Rees to spend the summer creating Aphex Swift—a full-length album mashup of the two artists’ music.

Rees, an artist/TVshow host/artisinal pencil sharpener best know for his comic Get Your War On, explained the reasoning behind the project in a post on his Tumbr:

I actually think Richard D. James (Aphex Twin) and Taylor Swift have a lot in common besides their songwriting talents — or, at least, they each have characteristics more commonly associated with the other.

For instance, Taylor Swift made her name by writing big-hearted confessional songs for tween girls. But a lot of Aphex Twin’s music (especially on the Richard D. James album, from which most of these tracks are culled) is also super romantic — saccharine, even. Sometimes I wonder if his impossibly complex, inhuman drum patterns are just serving as a layer of sonic indie-cred to make the heart-on-your-sleeve melody and delicate timbres of (say) Girl/Boy song more palatable for “cool” people. Or, on a more personal level, it’s like he’s protecting his bleeding heart behind a crazy tangle of barbed-wire snare rolls. AND WHO AMONG US HASN’T DONE THAT?

So part one of my thesis is: APHEX TWIN IS AS BIG A ROMANTIC CORNBALL AS TAYLOR SWIFT

Rees then goes on to argue that James’s trademark imagery that distorts his own visage in creepy ways is just as scary as Swift’s “incredible poise and superhuman competence…[like] when Skynet becomes self-aware.”

It is impossible to argue with any of this, especially when the music itself may be even better than that time Swift was mashed up with a goat: