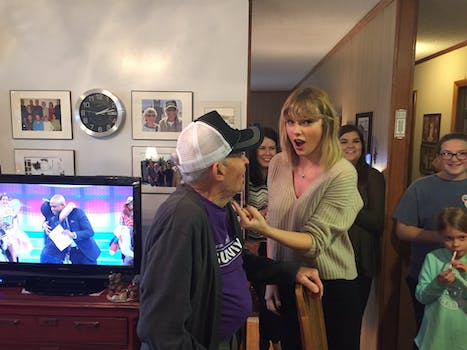 The pop star loves to give back to her fans.

The stereotype of a Taylor Swift fan is a screaming 13-year-old girl, but that’s not stopping this 96-year-old World War II veteran Cyrus Porter.

This week, the pop star stopped by Porter’s home in Missouri to surprise Porter and his family with a Christmas they’ll never forget.

@taylorswift13 puts the finishing touches on her Christmas visit to the Bootheel. pic.twitter.com/5nkZVejPw2

It's a Christmas Miracle!!! Thank you @taylorswift13. My grandpa was so excited!! pic.twitter.com/1bGlUys38b

According to Entertainment Weekly, she posed for photos with Porter and his grandkids before giving an intimate acoustic performance for the assembled family.

Swift’s no stranger to random acts of kindness like this one: Earlier this year, she donated $1 million to Louisiana flood victims and surprised a couple of fans at their wedding.