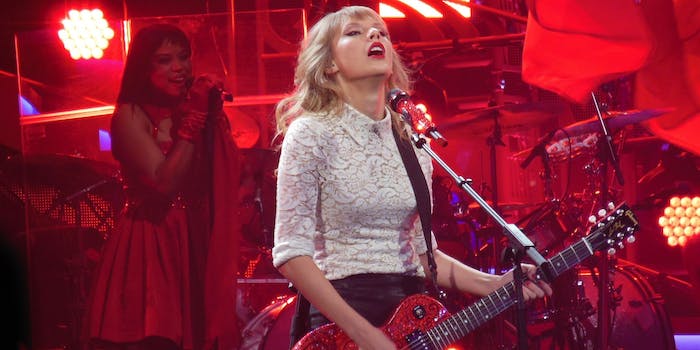 The tracks from Taylor Swift’s ‘1989’—ranked

Did Taylor Swift's latest effort make it out of the pop woods unscathed?

We first heard inklings that life-size Precious Moments statue Taylor Swift was moving in a new direction on 2012’s smash, Red. It was singles like “We Are Never Ever Getting Back Together,” “22,” and “I Knew You Were Trouble” that saw the starlet shedding her country curls and flirty sundresses for all the faux-edginess that accompanies a pair of Forever 21 leather shorts. But it’d take Swift two more years to bury those country roots and pursue the pop stardom she’s flirted with forever.

The official announcement came via Yahoo! stream in August that Swift’s next album, 1989, would see the singer embark on a pop sojourn with a trusted fleet of producers including Max Martin and Shellback. The news was accompanied by the release of her music video for the album’s first single, “Shake It Off.”

Once the screams of fervent Swifties died down, many casual fans were left to wonder if the album would be all brand: Would her trademark ballads of heartbreak and triumph be swapped for an album shilling 13 songs that sounded like a Diet Coke ad? “Out of the Woods” offered hope, but nothing was certain until the album’s midnight Monday release.

We’ve done you the courtesy of ranking the album’s songs from best to meh, in order to make the Swift fanfare easier to parse.

With an ’80s synth chorus that screams more Haim than Swift, it’s no wonder the second single has garnered the critical acclaim needed to cement the album as more than just a collection of cheap thrills. Lena Dunham’s boo has left his production signatures all over the track and it’s all the better for it.

The title itself is a not-so-subtle wink to Swift’s well-documented romantic past, “Got a long list of ex-lovers that’ll tell you I’m insane / but I’ve got a blank space baby / and I’ll write your name.” Through her dry-witted self-deprecation, she manages to perform the gargantuan task of turning the Single White Female persona more slapstick than stalker.

“Style” finds its footing with seductive guitars, slick synths, and a beat that catches the singer falling into a bad boy that’s too good to quit after dark. Imagine if Carey Mulligan’s character in Drive wrote a love song to a psychopathic Ryan Gosling.

No, it’s not the title of a Tyler Perry movie starring Kevin Hart or a self-help book written by a Real Housewife. Rather, it’s a track for fans craving a taste of the country-tinged Swift they fell in love with on Fearless and Speak Now.

Every album needs a physical song, and 1989’s is “Bad Blood.” The booming beat and chanting chorus defies the listener to do anything but stand up and stomp along in defiance of relationships past (or the STDs that resulted from said relationships).

The song’s cinematic quality and breathy falsetto finds “Wildest Dreams” straying into virginal Lana Del Rey territory. Even its chord progression seems to be a close cousin of Lana’s “Without You.”

The acoustic equivalent of a film based on a Nicholas Sparks novel. It makes you feel good in the moment; it’s got all the star talent necessary to succeed; but once you look back on it, you just feel cheap and empty.

This anthem is wide-eyed and innocent in its adoration for the city, holding all the promise and romanticism that comes with daydreaming about a life in Manhattan while watching Girls from a Midwestern bedroom. At the very best it offers the escapism of living in a Tribeca penthouse with millions of dollars for actual New Yorkers sandwiched in a three-bedroom Harlem apartment.

“Shake It Off” sounds like what I imagine Diet Coke taste like to white women. Both were created to cure the thirst of haters and both are harmful to your health. But at least there’s no awkward rapping in aspertame. Ultimately, both are addictive.

While the chorus is familiar Tay, the verses find her contorting herself to a darker, sexier corner of the pop genre. The marriage of the two is about as tolerable as the one between Kim Kardashian and Kris Humphries.

Even though it’s got Imogen Heap’s vocals and some saccharinely sweet xylophone, Swift’s slower stuff is harder to sell when placed against the uptempo pop. One final, emphatic “MEH!” is very much in order.

While 1989 is certainly pop, pop perfection is still a platitude that is up for debate. The album’s strengths and weaknesses both lie in Swift herself. A newcomer to the genre could certainly garner some success with an album like this, but it’s her established brand that will take 1989 to the top of the charts. Conversely, it’s the singer’s limited vocal range and the album’s heavy reliance on speak-singing and chanting that make it more of a candidate for Best Spoken Word album instead of Album of the Year.