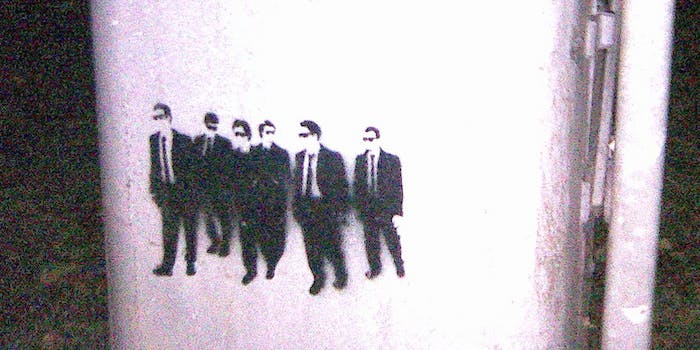 In what had to be a painstaking endeavour, an anonymous user uploaded the entire Reservoir Dogs script to Twitter. The main account, @ReservoirDogs_, tweets out the screenplay’s descriptions and stage directions.

Eight men dressed in BLACK SUITS, sit around a table at a breakfast cafe.

In addition, each and every character, from Mr. Pink (@MrPink_z)  to Nice Guy Eddie (@eddiecabot_) to even the cops (@reservoircops), has an account. The movie’s dialogue is tweeted out from the respective characters and retweeted by @ReservoirDogs_ at the appropriate places in the script.

You know what this is? It’s the world’s smallest violin playing just for the waitresses.

Since @ReservoirDogs_ tweeted the script in reverse, the screenplay is able to be read simply by scrolling down through the Twitter feed. The upload was finished on Jan. 1. It is a work of beauty, as Twitter’s 140-character limit gels perfectly with Tarantino’s signature quick-paced dialogue.

Currently, more than 5,000 users follow the main account. Of the four main characters, Mr. Pink understandably has the most followers, totaling 139. Mr. Orange has the least, with 99 followers.

We can only hope similar feeds are being worked on for Pulp Fiction and Django Unchained. In fact, why stop at Twitter? Perhaps the future will see Mean Girls told through Facebook status updates or Love, Actually narrated using Craigslist posts.