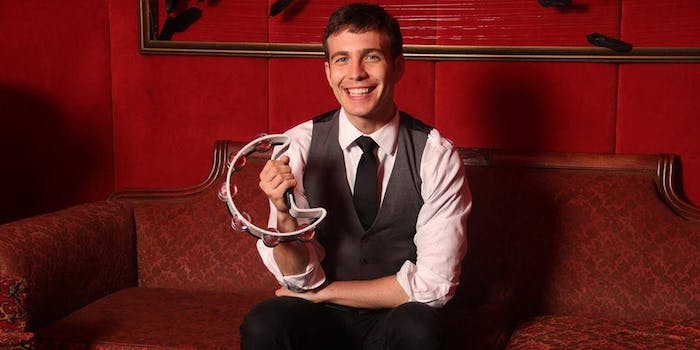 While we can’t take our ears off Postmodern Jukebox‘s cover of Demi Lovato’s “Really Don’t Care,” we also can’t take our eyes off of energetic tambourine guy Tim Kubart in the group’s newest YouTube video.

This cover is the latest in the string of Postmodern Jukebox’s vintage takes on pop hits, and while all the performers featured in the clip are talented, Kubart is unavoidably eye-catching. He twirls, he kicks, he even passes his tambourine off to one of the backup singers for her own percussion moment. You’ve never seen someone having a better time shaking a tambourine.

Kubart is more than just a tambourine player. According to his social media accounts, Kubart often plays bass for performers on America’s Got Talent and is the host of the Sunny Side Up Show on Sprout, a network for young children. If you think you can handle how adorable that is, check it out.

We at the Daily Dot would like to become the first card-carrying members of tambourine guy Tim Kubart’s fandom.