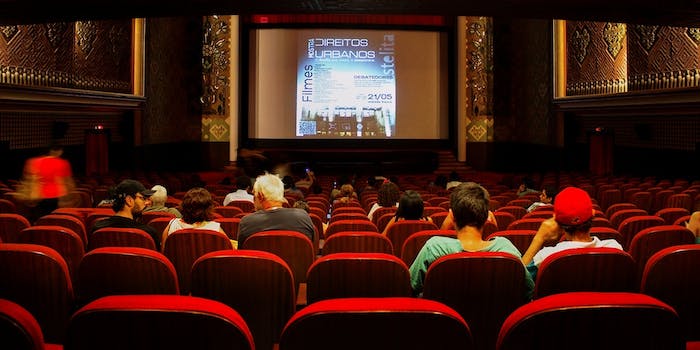 It's time to rewrite the rules of Hollywood for the age of crowdfunding.

In the crowdfunding school of filmmaking, the argument can be made that every donor is a producer—even if those donations generally earn you an appreciative tweet from the filmmakers at best. But a new film being crowdfunded on Kickstarter, Talk Is Cheap, is aiming to put its money where its mouth is by offering an official associate producer credit to every donor who contributes to the campaign.

The filmmakers behind Talk Is Cheap, a fictionalized account of one teenager’s mission to do something about climate change, launched a Kickstarter campaign two days ago, seeking to raise $1.5 million to produce the film. It’s a lofty goal that they’re hoping is buttressed by having Oscar-winning producer Barrie M. Osborne, one of the producers of The Lord of the Rings trilogy, The Matrix, and Face/Off, as their executive producer. The other sell? Giving an on-screen associate producer credit to every backer who donates even just $1. Rather than tier donation rewards up to the thousands of dollars range, the film has only three rewards: for $1, onscreen associate producer credit; for $15, the credit and a streaming copy of the film; and for $25—you guessed it—25 onscreen associate producer credits for 25 people of your choosing.

To put this into perspective, Zach Braff’s Wish I Was Here Kickstarter campaign charged a minimum of $10 just to receive production updates from Braff throughout the shoot, whereas one of the priciest rewards, for $9,000, earned a mere onscreen credit that would read “Visual Effects Made Possible By” said donor. Similarly, the Veronica Mars film Kickstarter from Kristen Bell and director Rob Thomas offered a speaking role for the maximum $10,000 donation, but no producer credits to speak of at any donation level.

Deadline Hollywood was quick to pan Talk Is Cheap’s gimmick—which, to be clear, is most definitely a gimmick to entice Hollywood hopefuls the chance to see their name (ever so briefly) in the lights—but ultimately, are Kickstarter backers not film producers by definition?

Hollywood has long been known to hand out producer credits to people for any variety of reasons. While executive producers are usually involved elbow-deep in almost all aspects of the development of the film, from concept to completion, lesser credits—those of coproducers, associate producers, supervising producers, and so on—can be handed out for a myriad of reasons (being a manager of one of the actors or writers of the film, being an junior executive who helped develop the film, offering some sort of financial contribution toward the film), the generally unifying reason being to placate the person being named.

The Producers Guild of America is equally vague on what defines an associate producer. While an executive producer credit is very specifically delineated by the PGA—“an individual who has made a significant contribution to the motion picture and who additionally qualifies under one of two categories: having secured an essential and proportionally significant part (no less than 25%) of the financing for the motion picture, and/or having made a significant contribution to the development of the literary property”—an associate producer is by far much more discretionary, and ceremonial, a title.

The Associate Producer credit is granted solely on the decision of the individual receiving the Produced By credit, and is to be granted sparingly and only for those individuals who are delegated significant production functions.

At a $1.5 million campaign funding budget (at the time of publication, the film has earned only $8,457, but has another 28 days to go on its campaign), it’s clear that the filmmakers behind Talk Is Cheap aren’t handing out credits as “sparingly” as the PGA would advise—but there’s also nothing in the PGA constitution that reprimands them for handing out credits like they’re candy. While most producer credits come with some sort of profit participation, Talk Is Cheap has promised no such thing—and again, by PGA standards, isn’t under any requirement to do so.

Industry insiders like Deadline Hollywood can mock the trend and chalk it up to a cheap gimmick for a film that might not otherwise get funded, but really, what Talk Is Cheap is offering to its backers is no different from what other independent films that secure financing in the more traditional offline avenues of fundraising: a ceremonial title that is offered up as a thank-you. While Talk Is Cheap may be cutting through the backroom dealings that usually secure funding and producers, their Kickstarter donors are every bit as much producers for helping bring the film to fruition. Offering them onscreen credit shouldn’t be viewed as an aberration; it should instead become the norm for all crowdfunded films.

Photo via Direitos Urbanos/Flickr (CC BY 2.0) | Remix by Jason Reed