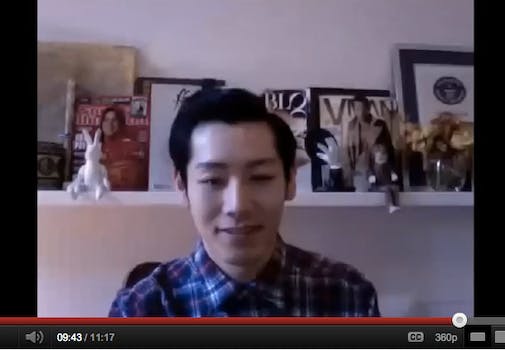 The competitive eater filmed his live interview session on Reddit yesterday. Here are the highlights.

Takeru Kobayashi is likely the most accomplished competitive eater in the world. Known as Kobi to his friends, he dropped by Reddit Wednesday to field questions about anything on redditors’ minds.

Unsurprisingly, most of the session focused on Kobi’s favorite foods and his bowel habits.

Redditors asked him questions in English. Kobi filmed video of himself being read the questions, then responded in Japanese. A translator typed his answers, in English, to Reddit.

Q. How did you discover your ability to eat so much food? (Tropikal)

A. I was a university student and eating with a friend at a fast food curry shop. There was a challenge menu to eat a certain amount of curry. I did it and ate 5,100 grams (11lb 4 oz). I sort of knew I could eat alot, but that was when I really knew I had this absurd talent.

Q. It seems the food eaten is often stuff like hot dogs, chicken wings, pizzas, but never vegetables or fruit. Why is that? (DoubleSeven)

A. It’s easy to judge, all the same food at the same size and weight.. not including chicken wings.

Q. Do you have in mind an age at which you would have to consider “retiring”? Or do you plan on doing this as long as your body will let you? (VanessaL3000)

Q. If you could only eat one thing for the rest of your life, what would it be? (kinkyslinky)

A. Believe it or not yogurt. I really do love it. Sometimes I’ll go a whole day just trying tons of different kinds. I also love tofu, but if I had to eat it everyday, it’d be yogurt.

Q. You mentioned your stomach is lower than most people and this allows your to put more inside your stomach as it expands upwards. Have you ever been medically examined? (BoxOLuv)

A. The stomach condition is true. I have been checked not on a serious level. I have had a camera put down in my stomach before. When they put it inside, just the camera touching the inside of my stomach stretched it and it surprised the doctors because of the elasticity.

Q. Not sure how to ask this delicately or politely, but have you ever weighed yourself before and after a competition? (whosyourbuddy)

A. There was once a contest that was 45 minutes and I weighed myself before the contest and after the contest as well, and after the contest, in that particular one, I weighed about 25lbs more and I remember that particular one so I can give you that example. About my bowel movements, what people may really think is that, you know, they might imagine that a huge amount comes out. That’s not exactly the way it is at all. Actually, what happens is I go to the bathroom just like any of us do and it comes out the same way except that it comes out in many, many more times, so you’re going to the toilet a lot rather than going and there just being a huge amount. The other thing is that if there is a lot of water intake it, certainly, the consistency will be soft, not firm.