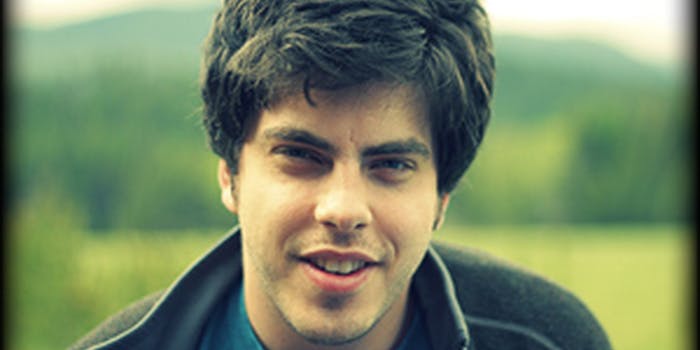 The Symphony of Science has become a YouTube sensation. The composer talks about his creations.

John Boswell boasts the rare distinction of being the only YouTube phenom to have a 7-inch single pressed by Jack White’s Third Man Records, a feat he earned with his first Symphony of Science piece, A Glorious Dawn.

While his style bears a distinct similarity to the Gregory Brothers, better known as the Auto-Tune the News anchors, what sets Boswell apart from the beginning are his original, electronic soundscapes.

An economics graduate of Western Washington University, the 25-year-old composer got his start as a DJ a decade ago, before studying music theory and producing.

Boswell released an album, Escaping the Tangle, as part of his side project, Colorpulse. It essentially served as the blueprint for his Symphony of Science compositions, with New Age sentiments and private longing that recalled the work of Aphex Twin and Boards of Canada.

On the occasion of his latest online hit, “The Quantum World!,” Boswell opened up about his creative process, the perils of being labeled a one-hit wonder, and the future of Symphony of Science. We wrote about him yesterday. Now, here is the interview, edited for clarity and length.

Daily Dot: Andrew Gregory of the Gregory Brothers told the Daily Dot that “Auto-Tuning does make everything sound better, but it does not do that equally to all unintentional singers.” Have you found that to be the case as well?

John Boswell: What Andrew said is entirely accurate. Carl Sagan has a legendary Auto-Tune voice; others I’ve attempted do not fare so well. It depends on a number of factors: how much they mumble, if they draw out their speech, etc. All accidental singers are not created equal.

DD: With so much to choose from, how do you find your source material?

JB: For my early videos, I would only use a few sources for material to remix; now that I have expanded to other fields and used up a lot of familiar sources I rely on social media to clue me in to the best clips to use. Choosing the right melody is the key to highlighting the message. If it doesn’t groove with the flow of the original speech, it won’t work; if it does, there’s a synergy that gives the series it’s inspirational qualities.

DD: Wikipedia says, “After his first few videos, Boswell began seeking permission to use the clips he uses in his project.”

JB: That’s not true. For some clips I do ask permission, but I consider the works Fair Use of the original materials, and seeking permission for every clip would be cumbersome.

DD: Why have the rights to Carl Sagan’s material been put on hold?

JB: Rights to use Carl Sagan in the videos have been suspended due to the work underway on a remake of Cosmos, scheduled to debut in 2013. I’m a little bummed about the rights not being available but very excited to see the Cosmos reboot.

DD: In some ways, “A Glorious Dawn” is an Internet one-hit wonder. What do you think has helped you turn that concept into a successful series?

JB: “A Glorious Dawn” is easily the most popular and by some means the best video. I think the latter ones are of better quality, but the novelty has worn off. The flexibility of the concept – turning scientists into rock stars – is what’s helped me develop the full established series. It started with Carl and Stephen [Hawking] but has grown and transformed into a true symphony of scientists.

DD: What would you say is the long-term goal for Symphony of Science? Is there a bigger picture outside of YouTube?

JB: The long term goal is to eventually put out a DVD compilation of the series once it has run its course. I can’t say when that will be – I’m still working on videos for the time being – but that day will come. I hope the compilation can be used in educational settings as well as for entertainment.

“We Are All Connected”