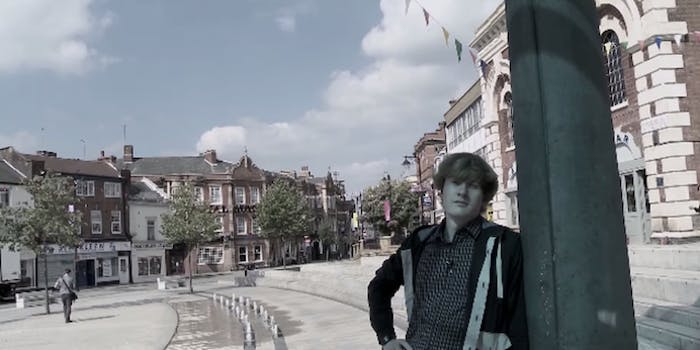 James Acaster is a rising British comedy star. So why is his webseries so dull?

James Acaster is one of the rising stars of British comedy. He’s a constant tourist, continuously pops up on the U.K.’s ubiquitous TV panel shows, and for the past three years he’s just missed out on one of comedy’s biggest awards.

But here’s the thing: As a comedian, I can’t stand him. To me, his act is troublesome in its flimsiness—with barely a hint of an excuse for this, such as disarranged absurdity, for example— and it is all delivered in a monotonous nasal drone that manages to suck out any enthusiasm I may be garnering. Reviews about him often include words such as “deceptive” or “subtle,” and while for context he’s used framing devices in the past, all I can hear are empty musings.

So it could be guessed that his webseries, Sweet Home Ketteringa, might not agree with me. And that would be right. But that doesn’t necessarily mean that you won’t enjoy it.

The premise of Sweet Home Ketteringa is sound: Acaster travels back to his—by all reports and appearances pleasant but somewhat dull—home town of Kettering after years of living in London. Each episode takes him to a local, usually moribund landmark (the local soccer club, park, and museum), where he pokes around while occasionally talking to people.

These are the sort of setups comedians relish because they provide a succession of launching points for improvisation. Give them the dog statues, queer museum exhibits, and fans of a free-falling semi-pro soccer team Kettering offers, and they’ll riff for ten minutes on each and then cut it into something snappy when they get home.

But Acaster’s disengagement kills any momentum these scenarios provide. He’s consistently aloof and, performance or not, it is damaging. Sure, jokes sometimes need to be given room to breathe, but time and again the impetus within scenes is destroyed by his strained pauses and lethargic pacing. It makes for quite a bare series, where attempts at humor are unleashed sparingly.

Add to this Ketteringa’s odd, manufactured moments; the ill-fated, isolated attempts at mockumentary where a few stuttering narratives have been created. A member of the crew is continually recognized, much to Acaster’s chagrin, and people he is meant to interview do not show. But all these feel comparatively fake when contrasted with the rest of the series’ tedious but naturalistic tone.

Mostly though, the problems with the series concern Acaster’s style. Seeing that this is a style consistent with his standup, however, it’s not surprising that this is the webseries he made. It certainly contains his hallmark and so it therefore follows that if you like the man’s other work, there’s a strong chance you may like what he’s done here.