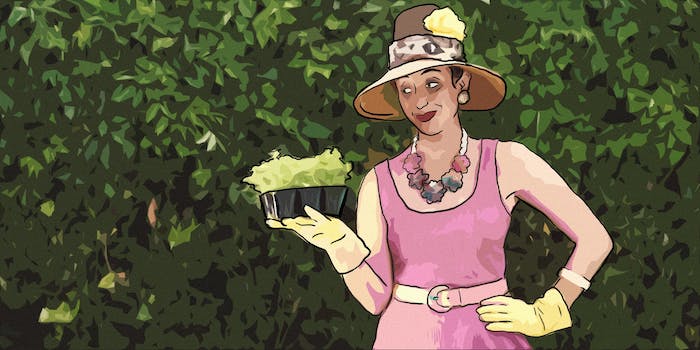 From small-town gags to Comedy Central, Suzelle is just getting started.

In 2014, the eccentrically lovable Suzzelle burst into the YouTube sphere with the mission to combine comedy and DIY in 180 seconds or less. Two years later, Suzelle’s bite-sized videos have led to two books, DIYary and Suzelle DIY, and a collaboration with Comedy Central—which in May began screening her most popular YouTube videos on its channel.

Known for her signature updo and her love of pink and cheetah print, Suzelle’s personality has won the hearts of fans around the world. Her DIY videos range from making braaing pie (her favorite activity), to building cinder block benches and dollying your own trolley. Her projects often include her best friend Marianne, a mostly unwilling participant, and while the end product is always successful, the videos often end in either a fire or an awkward social interaction. Produced by Sketchbook Studios, Suzelle has quickly become the South African studio’s most popular original series and, as the studio cites, been the catalyst behind its expansion into multiple other YouTube series.

Her comedy is universal, and much like Threadbanger and You Suck at Cooking, Suzelle’s channel has thrived because of her unique blend of comedy and achievable DIY projects. Amid huge channels like the King of Random and Crazy Russian Hacker, which trend every week, Suzelle is a breath of fresh air within the DIY community.

Just as Miranda Sings before her, Suzelle is actually a character played by illustrator, actress, and artist Julia Anastasopoulos.

“Many things inspired the creation of Suzelle,” Anastasopoulos tells the Daily Dot via email. “Initially we were just looking for something fun to make outside of our commercial work and we were interested in experimenting with YouTube. We were inspired by the wonderfully colourful characters who make online tutorials, and we imagined what a small-town, South African take on this would be.”

Anastasopoulos relates deeply to her character, though she might not be found wearing lipstick as often. Growing up in an artistic family, Anastasopoulos has always been passionate about art and DIY, and outside of Suzelle, continues to bounce from illustrating children’s books to creating art installations around Johannesburg.

In 2014, just as Suzelle was beginning to gain traction, Channel 24 named Anastasopoulos’ character “South Africa’s Favorite Online Celebrity.” She’s been on a digital tear since.

“My advice is to just go for it, and stick with it,” Anastasopoulos offers as advice for aspiring YouTube creatives. “If you are constantly creating new material, you will just get better and better at it—and in so doing your audience will grow and so will you. I do believe in pursuing numerous mediums and projects, but it is really important to take time out for yourself—I can’t think creatively if I am stressed.”

As the holidays quickly approach and Vlogmas clutters my subscription feed with “simple gifts” that leave me flummoxed, I continue to champion the work of Suzelle, and Anastasopoulos, as in one video she’s able to make me laugh… and then teach me how to make a table. Her channel is a rare spotlight on the South African YouTube community, and I can’t wait to see what she will be braaing next.