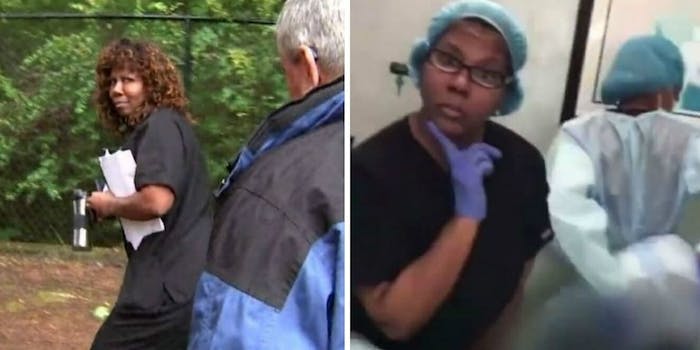 Amid malpractice suits, a cosmetic surgeon in Atlanta has been accused of posting YouTube videos of herself dancing around patients in an operating room when she was about to perform surgery.

According to WSB-TV, Dr. Windell Boutte posted more than 20 videos of herself (and other people in the operating room) dancing and singing around unmoving patients when they’re about to undergo cosmetic procedures.

In one video, she raps the lyrics to O.T. Genasis’ “Cut It” before she makes an incision on a patient.

SHOCKING VIDEO: More than 20 videos that were posted on YouTube show a doctor singing and dancing over unconscious patients in the operating room. She even cuts some for the camera! The malpractice suits she's facing, Monday at 5 p.m. https://2wsb.tv/2KAd7Ud

Confronted about the issues recently by a WSB reporter, Boutte refused to answer questions and walked away.

Boutte’s YouTube channel, which has been active since 2012, has more than 300 subscribers and over 34,000 views. Her videos mostly consist of Boutte introducing her patients to the camera, asking how they discovered her practice, and showing what they look like after the surgery has been completed.

In one video, Boutte speaks to a patient about to undergo liposuction.

Boutte is reportedly facing seven malpractice suits. One stems from a mother who reportedly went in for a tummy tuck and liposuction in 2016, weeks before she was set to be married. According to the court records obtained by WSB, that patient’s heart stopped on the operating table, and she suffered permanent brain damage.

According to Boutte’s website, she has been board-certified since 2007, and she calls herself Atlanta’s No. 1 cosmetic surgeon.

Update 11:07am CT, June 10: Boutte has had her medical license suspended by the state of Georgia, according to CBS News. The board reportedly called Boutte a “threat to public safety.” It also said she “failed to conform to the minimal standards” in the cases of numerous patients. CBS reports that at least seven people have sued Boutte for negligence. She’s settled four of those cases.

“Would I go back and do anything differently?” Boutte said, via CBS News. “No, because it was something unforeseen and unpreventable.”