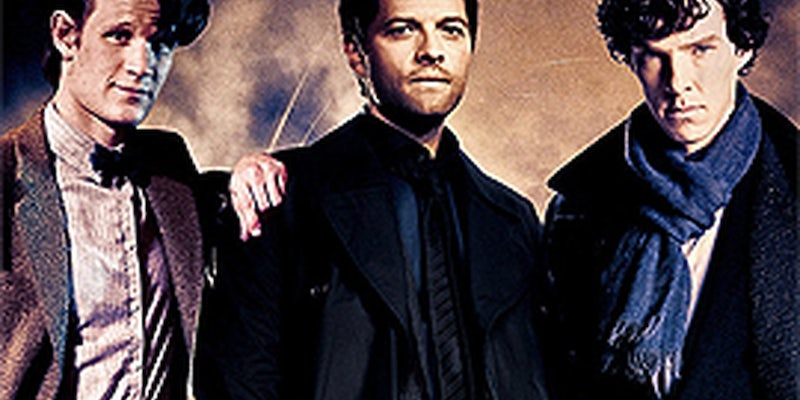 In short, it's a complex and creative crossover in fandom that combines the worlds of Supernatural, Doctor Who, and Sherlock.

If you’ve spent any time on Tumblr recently, then you’ve probably seen references to something called “Superwholock.”

Urban Dictionary has helpfully defined “Superwholock” for us: “A fan-based idea of combining three shows, CW’s Supernatural, BBC’s Doctor Who, and Sherlock.”

Basically, Superwholock is a complex crossover—a fictional creation that imagines those stories all reside in the same universe, where the characters can interact with each other and go on adventures.

In Superwholock’s case, this usually involves saving the world from impending apocalypse, something so serious that it only makes sense to enlist as many superheroes as possible to stop it—in this case, the Doctor and his assistants, Sherlock Holmes, John Watson, Sam and Dean Winchester, and the angel Castiel.

Superwholock may not seem an intuitive choice for a widespread fandom crossover, but it makes sense when you consider their common elements.

The origin of the SuperWhoLock phenomenon isn’t clear, though it seems to have sprung on the scene in January of this year. “I want to get in on this team free will/team tardis/blogger detectives vs the universe thing because i love crossovers,” commented artist hoursago on Tumblr at the time. Around then the first blogs started to pop up: superwholock, fuckyeahsuperwholock, asksuperwholock, and a dormant superwholockfic community on LiveJournal.

Though the trend was widespread, it didn’t really pick up as a mass phenomenon until a few months later, perhaps in part because of a popular fictional trailer for the SuperWhoLockian universe, created by Tumblr user mc-steamy. The video has racked up over 13,000 reblogs since it was posted in April.

SuperWhoLock has been a recurring popular fandom since then, but the recent wrap-up of the latest Doctor Who series combined with the return of Supernatural for its eighth season has intensified the love in recent weeks. The result is an endless stream of creative combinations of the three fictional universes—particularly fanart, fanfiction, and GIF-sets, plus some phenomenal fictional trailers for the fictional verse.

Part of the appeal of Superwholock is not only the crossover element, but the element of mix-and-match. Wholockians is an active LiveJournal community, while the fuckyeahsuperwholock Tumblr has links to each iteration of the phenomenon: Wholock, Superwho, and Superlock. (And sometimes The Avengers step in and help, too.)

Not all members of the three fandoms are happy about Superwholock’s popularity. “I’m close to giving up Tumblr because it’s everyfuckingwhere,” complained a fan on popular confessional journal fandom_secrets in May, in response to a confession about the trend that garnered a long debate about the merits of crossovers in general. “I want to just enjoy my ONE fandom without having those other two smashed onto it.”

But the creativity and ongoing popularity of this fandom meme seems to have its roots in the elements that made these shows popular to begin with. As Supernatural’s creator Eric Kripke points out, modern urban legends are “every bit as fleshed out as any world mythologies.”

We might say the same thing about the new legends that fandom creates for itself.