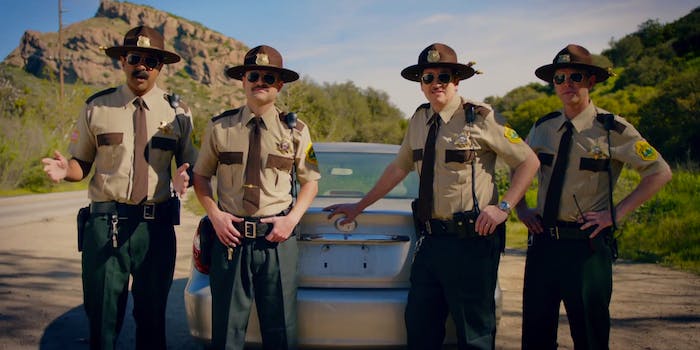 The guys of Broken Lizard have launched an Indiegogo campaign to make our Super Troopers sequel dreams come true.

It’s been 14 years since Jay Chandrasekhar, Kevin Heffernan, Steve Lemme, Paul Soter, and Erik Stolhanske have graced our screens as the lovable asshole Vermont state troopers more likely to prank one another than protect and serve. Fans have asked the comedy troupe for years when they would be making a sequel to the comedy, but they haven’t had a concrete answer until now.

Broken Lizard announced the Indiegogo campaign in a Reddit AMA Tuesday and broke it down for fans: They already have a script, and Fox Searchlight has even agreed to distribute the film in the U.S. and Canada. But in order to do that, Broken Lizard has to provide the money to make the film, which is currently set at a minimum of $2 million.

“Okay, here’s the deal,” Chandrasekhar said in the Indiegogo promotional video. “We’re finally getting a chance to make Super Troopers 2. The script is written and the mustaches are thick and furry. But what happens next is up to you. You see, we know people really want to see this movie, and by joining us you can help prove it.”

Like the Veronica Mars movie before it, Broken Lizard is appealing to the fans to show the movie studio that there is an audience for something like Super Troopers 2, and the fans are going to do it with their wallets. Fans can purchase perks like script access, a movie ticket to see the film once it’s out, drinking alongside Broken Lizard at Beerfest, becoming extras, and even the chance to have the team be your groomsmen (or bridesmaids) at your wedding.

In just one day, fans already raised more than $1.8 million as of press time, and it’s incredibly likely they’ll drive through that goal with their state trooper cars. But, as they remind fans, the $2 million is the bare minimum it would cost to make the film, and the more money they raise, the better the film can be.

And if the promotional video is any indication, the guys have still got it.