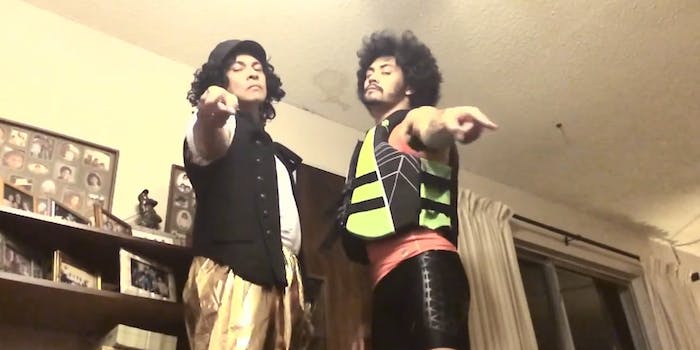 As it turns out, Gabriel Valenciano learned from the best.

A 15-second supercut of Valenciano dancing enthusiastically to the Space Jam soundtrack went viral in September, and now he brought his dad, Gary, along for another super selfie.

Both father and son are putting on their best “dance as if nobody’s watching” moves and wearing ridiculously dated outfits as they jam out to a song that was made for dancing by yourself.

But what exactly makes a super selfie, anyway? It’s what The Independent is calling President Obama’s selfie with British Prime Minister David Cameron and Danish Prime Minister Helle Thorning-Schmidt during Nelson Mandela’s memorial service, but Valenciano’s video predates the selfie seen (and memed) around the world—plus, he’s already got 10 super selfie videos on his YouTube channel.

According to Valenciano, his term has nothing to do with one of the selfie’s staples.

“I guess it’s a ‘selfie’ that has nothing to do with taking a photo of yourself,” he explained to Social Daily News. “Rather, a video of yourself disregarding (most important word) your self-image, letting loose and just tearing it up.”

If that mentality could also apply to the traditional selfie, the world leaders’ photo (along with thousands of other selfies online) have a whole new meaning.