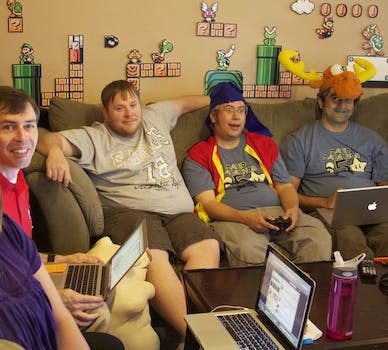 A team of gamers beat almost every Mario game during a five-day gaming marathon, and they racked up a six-figure donation for Child's Play along the way.

Over the past four years, video gamers have put their button smashing skills to use to help raise about $500,000 for charities helping children and an orphanage in Kenya.

Now a group of Super Mario fanatics has added more than $112,000 to the pile in a video gaming marathon to raise money for Child’s Play, a charity that provides games and toys to children in the hospital.

Over the last five days a group of 12 gamers completed almost every single Super Mario video game on the planet—including Mario Galaxy, Super Mario Bros. and Mario 64—as part of Mario Marathon 5. The gamers played from a living room in Lafayette, Ind., while being live streamed over the Internet courtesy of Twitch.TV.

“Nintendo says that, ‘Wii is for everyone.’ We’ve taken this to the extreme by inviting everyone in the world to share our experience by watching online as we play Mario on the Wii,” wrote the group on its FAQ page. “[T]he Mario Marathon team spends a lot of our own money making donations, buying prizes, mailing press releases, etc. The event is a hobby and a way to create a bigger charitable impact than we could afford ourselves.”