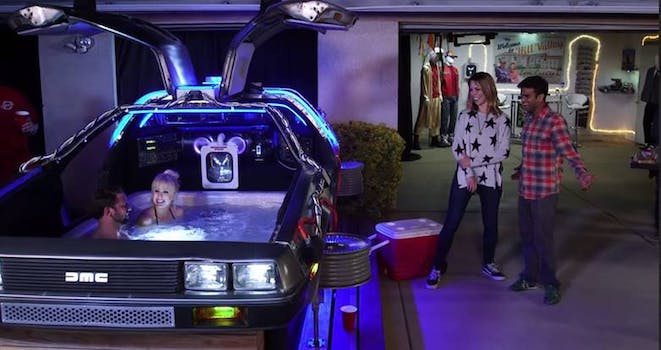 One lucky fan will be throwing hot tub parties... from the future.

While you can’t get a DeLorean to travel through time (yet), thanks to Super Fan Builds one lucky fan has one that doubles as a hot tub.

The series aims to create one-of-a-kind items for fans, from Lego die-hards to Batman aficionados. On the most recent episode of Super Fan Builds, the gang surprises a Back to the Future fan with a tricked-out DeLorean ready for the most epic of parties.

Super Fan Builds worked with the DeLorean company to make sure getting a hot tub inside a car was feasible, but the ability to make the elaborate build hinged on a partnership with Verizon’s go90, which will premiere this season via its mobile-only platform.

“When we first started Super Fan Builds there was  always one build that the team brainstormed, that I always wanted to try and build, but we could never afford it on our own,” Andy Signore, senior VP of content for Defy media, told the Daily Dot via email. “So when we got the opportunity to team up with Verizon’s go90 and truly upsize our budgets, that long-lost idea was placed at the top of our build list, and it was the DeLorean ‘Hot Tub Time Machine.’ It’s the one build I am truly jealous of.”

Hot tubs aren’t the only trick up the show’s sleeve. The series also shared a whimsical and practical build of a couch shaped like Toothless, from the How To Train Your Dragon franchise, for a young girl and her family in the premiere episode.

Subsequent episodes will be available exclusively on the go90 app.