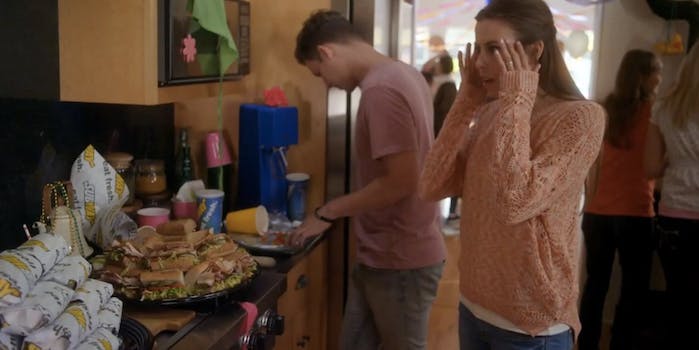 This webseries takes the crown for most absurd product placement

The group is left with a shameful testament to a poor early career choice, basically an advertisement that they are open for business

It doesn’t matter if you have never heard of Cimorelli—six sisters who have gained a degree of success singing a cappella covers on YouTube. Because Subway has, and it’s ensuring that the group’s new webseries Summer With Cimorelli is “served fresh.”

Product placement is hardly new, and indeed this isn’t even the first webseries that a fast food chain has been involved in (nor even Subway’s first), but it would be difficult to find a more brazen, complete disregard for any subtlety in the process. You could use an expression like “shoe-horned” to illustrate how the references to sandwiches find their way into the narrative, but it would not be strong enough, seeing as at least feet belong in shoes, no matter what sort of fight they sometimes put up. It’s as if the makers of Summer With Cimorelli saw that scene from Wayne’s World and interpreted it as being instructional.

In episode 1, the girls have been left alone (“for the summer”) by their archaeologist parents, but by the time we arrive on the scene, things have already, in a Nickelodeon sort of way, gone a little bit crazy. There are streamers everywhere, and a llama is out by the pool. A police officer sees the suspicious pile of sandwiches (curiously uneaten) and hints that the subs that were ordered for their party were to blame for the chaos. “We were on a budget,” reply the girls, taken aback by this line of interrogation. “Subway is affordable, and you get your food just the way you want it.”

Sure, it’s an easy target, and fooling your children into thinking that a “couple of kids ordering some subs and hanging out” is the epitome of youthful rebellion is certainly one upside of this program’s clunky insidiousness. But it’s also hard to ignore that the whole thing is underscored by a strange vibe created by adults playing themselves as children. It’s not exactly Don’t Look Now, but it feels odd when eldest sister Christina “wanted to prove so bad” that she was capable of looking after her siblings. She’s almost 24; why does she even have a “summer”? And when 20-year-old Lisa reveals she has a crush on a guy at Subway it is painted in a way as if they are both only 15.

If it were just used as a delivery mechanism for Cimorelli’s songs—which are bright, if not particularly memorable—then Summer With Cimorelli could well have been an inoffensive springboard for the sisters’ talents. Instead, the group is left with a shameful testament to a poor early career choice, basically an advertisement that they are open for business. Let’s just hope Depends doesn’t call in time for season 2.