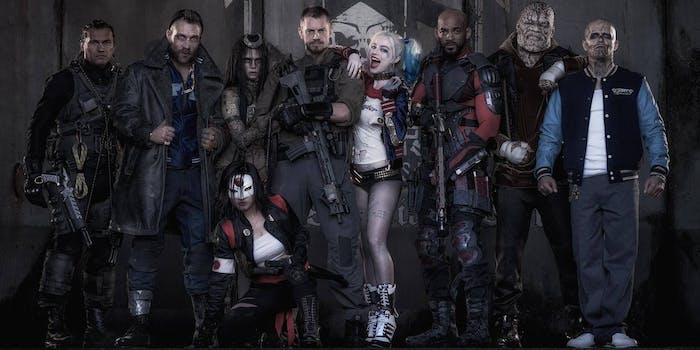 Get excited: This is the first cast photo for ‘Suicide Squad’

David Ayer casually dropped a photo on Twitter on a Sunday night.

Just last month, the Internet went absolutely bonkers over an image showing off Jared Leto in his full Joker makeup for next year’s Suicide Squad film. Fan reactions were mixed, to say the least. It seems that director David Ayer needed to show the Internet something to quell detractors.

On Sunday night, he graced us with a new image showing the entire Task Force X—with the Joker notably absent—on Twitter.

From left to right, the image shows off Adam Beach as Slipknot; Jai Courtney as Captain Boomerang; Karen Fukuhara, most likely as Katana; Cara Delevingne as Enchantress; Joel Kinnaman as Rick Flagg; Margot Robbie as Harley Quinn; Will Smith as Deadshot; Adewale Akinnuoye-Agbaje as Killer Croc; and Jay Hernandez as El Diablo. IMDb shows Jim Parrack as Deathstroke and Viola Davis as Amanda Waller. There are rumors fluttering around that Ben Affleck might make an appearance after photos were released showing him on the set.

The image might debunk theories that the Joker was actually a part of the Suicide Squad. With him absent, it could mean the character will play a more adversarial role than collaborative. Of course, the red herring of the group is Harley Quinn, who’s far from sane or rational. I mean her boyfriend is pretty undeniably insane.

Either way, the conversation around Suicide Squad just got very interesting.

You can also find a higher resolution image here.