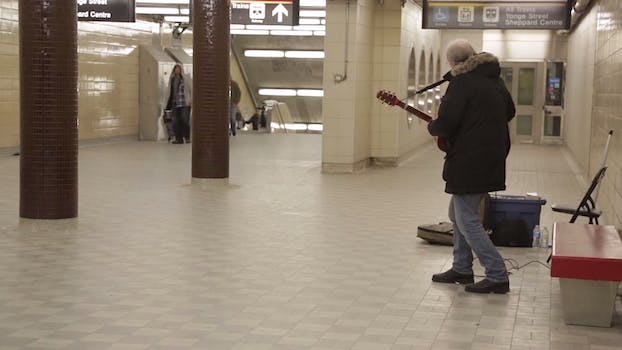 ‘Subway Stories’ looks for talent beneath the streets

Street musicians. No other profession is possessed with the same wild dichotomy between an artistic representation and the way in which they are actually perceived; passengers hurriedly skid pass them, heads down in the bowels of the subway, yet onscreen there is an assumption that, behind their opened cases and music stands, they are inherently interesting or wise.

And things are no different in Gariné Tcholakian’s Subway Stories, a series of five vignettes featuring some of Toronto’s buskers. It is the sort of production that allows the musicians to spout cringey, cod-philosophical assertions like “music is poetry” and then leaves these hanging, uninterrogated.  It is a product of the reverence towards its subjects, a tone which is palpable, and frankly, considering what we are shown of these musicians, mostly misplaced.

It’s not that these men—and all five featured are men—aren’t talented. They surely are, but they are all so monotonously similar and entirely predictable in their perspective that Subway Stories is less the intended character-study of those who soundtrack the daily commute and more a procession of variations on how they each “love music,” how their life “is music,” and how they “could not imagine doing anything else.”

They may well mean every word, but where’s the drama or the friction? It’s rare that anyone is entirely happy with anything, so how has Tcholakian found five who are so entirely positive? They all see themselves as messengers, bringing their music to the masses. Surely they are at least slightly peeved that this ambulating audience will only ever hear, at most, a few seconds of their creation?

And so it’s not until we get to see behind the performative sheen of the gushing minstrel—in the fifth and last episode, featuring Roger Ellis—that all this blind, generic adoration for music is momentarily put aside and we finally feel as if we are meeting one of the subjects. Ellis, who was in the band Edward Bear (best known for the 1972 hit “Last Song“) speaks of his earlier success and the impact that his now-deceased wife had on his music, and in doing so, he shows something of himself as well as the direction that the rest of this series should have taken.