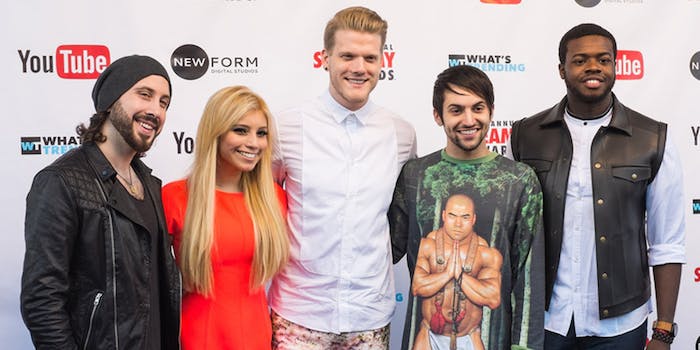 Barack Obama can now add “Streamy award winner” to his already impressive résumé. The president was awarded for his Between Two Ferns collaboration with Zach Galifianakis Thursday night in a pre-show event that honored 33 Streamy categories in advance of the Sunday livestream.

The Streamy Awards honor the best and brightest in digital video, and while the major awards will be handed out during Sunday’s livestream at the Beverly Hilton, Thursday’s event had a laid-back, Creative Arts Emmys vibe, giving many of the talent behind the scenes a moment to shine. Sharply dressed denizens of the digital video world packed the YouTube Space L.A. Thursday night for a pre-awards reception, taking to the stage for brief acceptance speeches and posing on the red carpet.

Marquee talent also accepted awards, including Pentatonix, who will perform at Sunday’s event. David Milchard, who embodies the adorable 2-year-old Coco in Convos With My 2-Year-Old, took home Best Actor in a Comedy, while Mamrie Hart joked that she was honored that the Streamys considered her an actress for “playing a girl named Mamrie who drinks too much” on her channel.

The 14 remaining awards, including Viner of the Year, Best First-Person Series, and the Audience Choice awards, will be handed out on Sunday at a show that will mix YouTube stars will traditional talent like Lance Bass and Tara Reid.