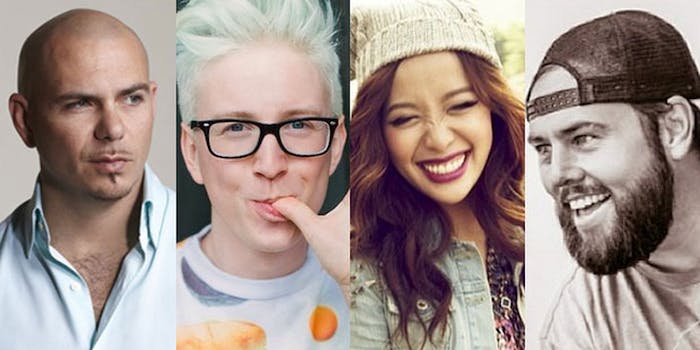 A  few years ago it would be hard to imagine a single award that honors both Tyler Oakley and Pitbull at the same time, but the two entertainers are among a handful of digital creators being honored with a Streamys ICON Award this Sunday.

The ICON award is a new addition to the Streamys, which celebrate their fourth award show in 2014. The award honors digital creators who’ve demonstrated leadership in online video, and in addition to Oakley and PItbull, they will also honor beauty vlogger Michelle Phan and Maker Studios co-founder Shay Carl. Each recipiant will be honored in a different area of achievement; Oakley for activism, Phan for inspiration, Carl for entreprenuership, and Pitbull for convergence.

“The Streamys have always honored emerging talent in the online video community, but this year, these innovators have engaged audiences with their creativity and impacted the zeitgeist like never before,” Michael Mahan, President of dick clark productions, which puts on the awards, said in a press release. “It’s my honor to recognize Pitbull, Tyler Oakley, Michelle Phan, and Shay Carlwith the inaugural Streamys ICON Awards Presented by Samsung for their accomplishments and social influence in online video and entertainment.”

The Streamys will stream live from Los Angeles on Sunday, Sept. 7, with hosts Hannah Hart and Grace Helbig. Nominations this year have stretched beyond YouTube and other digital outlets to include Vine, as well as digital achievement for television programs.