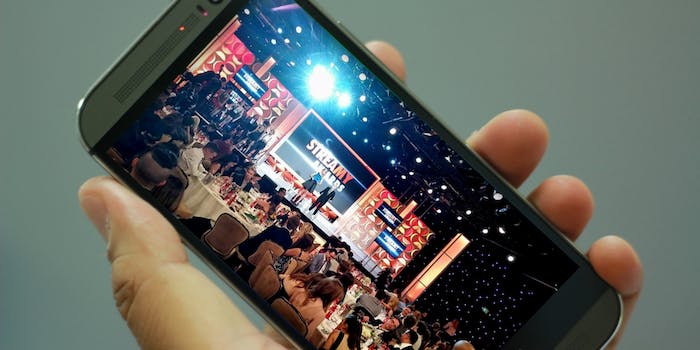 From video games to vloggers, digital video celebrated its biggest night Sunday when the 2014 Streamy Awards were handed out in Beverly Hills.

The ceremony took place in the same room in the Beverly Hilton where Hollywood annually throws the Golden Globes, giving the fourth annual awards a shine of legitimacy as digital video finds its place in the greater world of entertainment media. The evening had more polish than years past, and hosts Hannah Hart and Grace Helbig called out to other high-level award show moments like Ellen DeGeneres‘ infamous Oscars selfie. Epic Meal Time‘s Harley Morenstein and Epic Rap Battles of History‘s EpicLLOYD had one of the most lighthearted yet honest moments of the night, going off script to remind everyone that anyone who’d touched the microphone that night was a millionaire, and that YouTubers were big business, not just side gigs. While that’s an exaggeration, the super popular YouTubers who took home awards do command legions, and broker powerful brand deals.

Of course, the show was still a celebration of all things digital, meaning sometimes the video screens futzed out.

Overall, the awards were well spread out, with few nominees taking home more than a single award for their work. Video Game High School, which premieres its third and final season in October, took home awards for Best Ensemble Cast and Sci-Fi/Action Show. Other exceptions included Tyler Oakley, who snagged both an ICON award for his activism with The Trevor Project and an audience-voted Entertainer of the Year award, as well as The Lizzie Bennet Diaries, which won for Drama and saw actress Ashley Clements awarded for her breakout role.

The show also paid honor to recently departed Joan Rivers, who last year started her own YouTube show after a storied career. It was the evening’s most somber moment, since the genre of YouTube is so new that it doens’t have need for an in memoriam section. Overall, the show felt more grown up than years past, and more focused on digital-only talent instead of bridging the gap between digital and mainstream, with YouTube and Vine creators standing on their own as legitimate stars.

Of course, sometimes a non-digital artist can still bring down the house. While YouTube native artists like Pentatonix and Postmodern Jukebox wowed the crowd throughout the night, the evening closed with a dance-along to Starship, the 1970s group, now a duo, who thrilled with “We Built This City” and “Nothing’s Gonna Stop Us Now,” both featuring cameos from various YouTube singers. For all the work to make the Streamys feel like a legitimate award show, in the end it was simply a dance party. You just can’t take the laid-back vibe out of a show honoring the Internet.

Best Non-Fiction or Reality (Channel, Show, or Series) – Comedians in Cars Getting Coffee

Best Actress in a Comedy – Mamrie Hart, You Deserve a Drink

Best Actor in a Comedy – David Milchard, Convos With My 2-Year-Old

Best Original Song – “Whistle While I Work It,” Chester See

Viner of the Year – Brittany Furlan

Entertainer of the Year – Tyler Oakley

Show of the Year – EnchufeTV