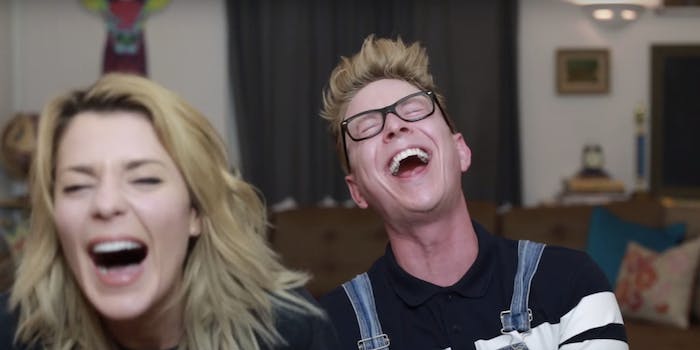 A sneak peek at the Streamys

Do you love digital creators so much you’ll watch them on television?

Do you love digital creators so much you’ll watch them on television?

That’s the overarching gamble of Hollywood’s flirtation with YouTubers and Vine stars in the past 12 months, so it’s no surprise that the Streamys, digital video’s premier awards show, is making the leap as well. For the first time, the show will air on VH1, and while viewers don’t have to use a traditional TV to gain access, the Streamy Awards, Dick Clark Productions, and VH1 are all betting that the elevated status of digital creators means they’re worthy of a splashy televised award show for 2015.

While last year’s awards happened as digital media edged into Hollywood’s space, Thursday’s event is set to cement at least the interplay of the mainstream media world with that of the digital stars who’ve been increasingly making waves into the traditional space. One might not be trumping the other, but there’s definitely no ignoring either. And with the TV’s lens on the evening, for the first time the show has to wow beyond the event ballroom’s walls.

“We are trying to be interesting and compelling enough to the viewers at home who may not be watching YouTube and be online all the time, and to the people in the theater that may not be watching TV,” explained Assaf Blecher, VP of Programming and Development for Dick Clark Productions, which partners with Tubefilter to produce the annual show. “It’s an hour and a half of nonstop digital music and mainstream celebrities. Everybody is showing up and wants to be part of it.”

While the night is hosted by YouTube wunderkinds Tyler Oakley and Grace Helbig, many of the presenters and performers, like Paula Abdul and Hailee Steinfeld, speak more to the traditional media space than the Web. Blecher explained that the digital community will be woven throughout.

“It’s going to be a really interesting night because mainstream is meeting online,” he said. “Every category will be presented by a mainstream star and a YouTube star together. Every performance almost is going to [have] an online element. I know there’s a lot of mainstream names, but they’re not isolated. It’s always with the community; it’s always with online.”

One other facet of the evening that will involve the community is the nomination packages, which were fashioned by big-name creators and will play before each awards is announced.

“Every package was custom made by a huge online creator,” explained Blecher. “The Beauty category will look completely different than the Gaming. It’s not a show we’re creating in a vacuum like many other award shows. The creators were a part of creating the show.”

Of course, digital takes center stage in the awards categories, which shift yearly to keep up with the changing face of digital media. For example, last year there were no awards for Snapchat, and this year a Snapchat series is leading the pack for nominations across the board.

“There was a moment when it was just YouTube, but then they needed a whole category for Vine,” explained Freddie Wong, who’s nominated seven times in some capacity for his work, including for SnapperHero, the Snapchat series leading in nominations. “It’s the sort of thing where as things evolve, there are more platforms with things that are interesting to watch on them. These awards are a way of highlighting where those are and what to keep an eye on.”

Wong is poised to launch a Hulu series in the fall, and he wondered if that would keep him out of the Streamys for 2016. It won’t, at least not by current standards, since Hulu nabbed a nomination this year, but as the Streamys have proven each year, the rules of engagement and the structure of the awards are always subject to reinterpretation.

“There’s the question, right,” Wong laughs. “At what point, as we all evolve and start to show up in things, at what point does that no longer become [Streamys]? … I’m curious to see where that goes!”

For the creators, winning isn’t so much the focus of the annual event, televised or not. Last year Epic Meal Time’s Harley Morenstein joked that everyone at the microphone was a millionaire. Even if that wasn’t completely accurate, it speaks to the digital set’s ability to achieve and create to high levels, with or without awards.

“Regardless of the outcome, that night is really about celebrating all the people that are doing what they love for a living,” said Matthew Santoro, a Toronto-based YouTuber who won Breakout Creator award at Monday’s pre-event reception. “If I walk away with an award, that’s just a huge cherry on top.”

Santoro holds a master’s degree in accounting, and he started his YouTube channel as a diversion during his boring day job. He eventually quit the job, went full-time making comedic list videos, and saw his career take off—to the tune of 4.5 million subscribers.

“My dad and my mom, while they were supportive, were both cautiously optimistic,” Santoro said about his jump from stable carer life to creator. “They were like, ‘Are you sure you want to give up five and a half years of school to do this whole thing?’ I just said, ‘I do.’ It’s my passion.”

Santoro will follow attending his first Streamys with a hosting gig at the Global Citizen Festival alongside Hugh Jackman, Stephen Colbert, and AsapSCIENCE YouTubers Mitchell Moffit and Gregory Brown. While he might be making forays into the mainstream, he still says he and other YouTubers still see themselves as the underdogs.

“It creates a very strong community,” he said. “That’s what I love about it, that we all kind of still look out for each other. If another creator can’t do a brand deal, they’ll pass it off to me. I love that. You don’t see that in Hollywood, I don’t think.”

So despite the Streamys dipping its proverbial toe in the Hollywood waters, it’s not forsaking its digital roots. VH1 will be simulcasting the event on its own website and YouTube channel, so that viewers can choose to engage with the entire experience online, if they wish. Dick Clark Productions’ Digital Distribution VP Ariel Elazar also said they’re working with digital platforms like Tumblr and Instagram to create content that exists within those individual communities.

“You’ll be seeing a lot of custom content around the show specific for Instagram, for Vine, for Tumblr,” said Elazar. “I don’t want to give that much away, but there’s a lot of that element of surprise.”

With the massive 90-minute undertaking on the horizon for Thursday, the production team has just one goal for the future: They want to do the show for 3 hours next time, Emmys style. That just might run counter to the expectations of the digital world.

“The people online, they’re watching really quickly,” said Blecher. “They’re on to the next thing within a minute. We need to give the viewers what they want. It’s fast, it’s entertaining, it’s going to be different every minute.”

In the end, the Streamys might be getting a shot at television, but hopefully it won’t be the television we’re used to: Get ready for a melding of the digital and mainstream worlds, at least for one night.