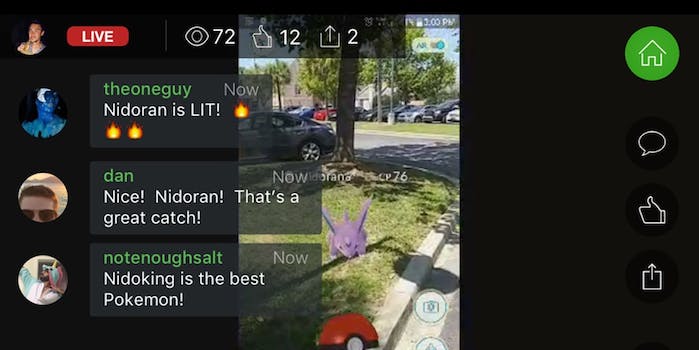 Stream, with tipping feature, wants you to get paid for ‘Pokémon Go’ broadcasts

Individual companies and creators are scrambling to figure out how they can incorporate the massively popular Pokémon Go app into their respective brands. Stream, a two-year-old livestreaming app based in Charleston, South Carolina, is hoping it can harness the power of Pokémon Go to promote a new feature on its platform.

It has announced a tipping service, which it says will provide financial gain for creators who use its screencasting service to share their Charmander-catching adventures.

Tipping on Stream is directed through a currency called “stacks,” which can be purchased within the Stream app. The smallest stack denomination—dubbed a “tiny stack”—costs 99 cents, while the largest “phat stack” costs $49.99. After buying these stacks, viewers can dole out virtual coins to their favorite broadcasters, thus helping content creators increase the financial potency of their Stream channels.

“This will allow viewers to express their love for their favorite content creators on the platform,” said Stream CMO Will Jamieson in a press release.

How can creators snag some of those tips for themselves? Stream suggests its users start catching ‘em all. Among mobile-first streaming services, Stream (which lets users share their phone screens with viewers) believes it is best equipped to serve as an outlet for Pokémon Go fever. Already, many of the app’s users have started using it as their personal Pokémon hub, and thanks to tipping, they’ve been compensated for their activity. Jamieson has told us tens of thousands of dollars have been paid out to creators already. There’s still plenty of room on Stream for more amateur Pokémasters, so feel free to join the fun.