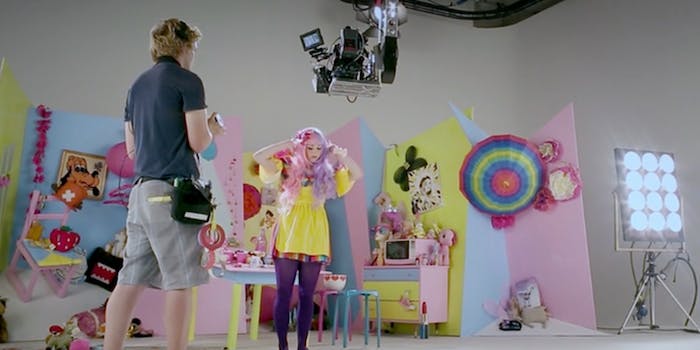 Behind the scenes of Doprah’s ‘Stranger People’

Pull back the curtain.

Doprah seeped into our consciousness this summer with the video for “Stranger People,” a colorful spin down a rabbit hole of anime, J-Pop, and K-Pop imagery, as singer Indira Force is repackaged as different personas and controlled by a disembodied hand. Doprah’s Steven John Marr told the Daily Dot the song’s lyrical thread is one of “denial, blissful ignorance, a dark reality disguised by a refined fantasy.”

The New Zealand duo was just nominated for best video at the New Zealand Music Awards, so it certainly resonated with people. Many YouTube commenters related to the J-Pop and anime themes, and others thought it was ripping off the culture.

“Some people got upset, which was a bit of a treat for us,” said director Thunderlips. “We were quite flattered that people took the time to hassle us on YouTube. Also, we’re nominated for best video at our New Zealand Music Awards this year, so we’d say the response has been ‘mixed.’”

Thunderlips added that the video is “a critique, but not of anime or J-Pop culture. We had something we wanted to say about the commoditizing of people in the music industry globally. J-Pop was just a great style to wrap our thoughts in, because the Japanese industry has a remarkable lack of pretense when it comes to packaging people for mass consumption.”

Here’s the cherry on top: An exclusive behind-the-scenes video of the making of “Stranger People.” The duo is currently touring the States and playing CMJ.