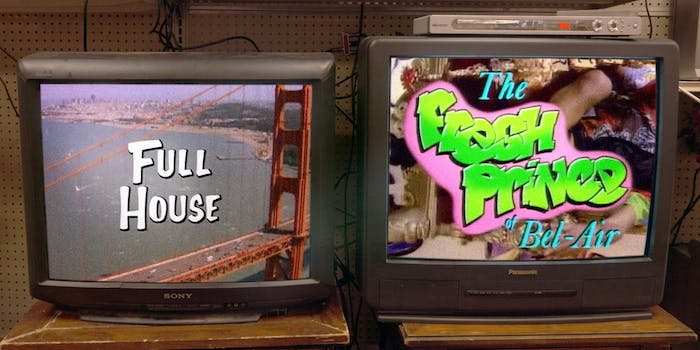 Nostalgia isn’t an excuse to reboot everything

The Internet is a cesspool of nostalgia.

We’re constantly bombarded with listicles reminiscing about the glory days of the ‘90s and early aughts, when the world full of hope and great fashion, and our favorite TV characters had snappy catchphrases. There’s a seemingly infinite amount of Tumblr fan blogs celebrating the television of that glorious time. But the power of Internet nostalgia has surpassed innocent reminiscing.

We are officially in the era of the reboot.

I’m grateful Netflix and Hulu are not only producing shows rejected by major networks, like Unbreakable Kimmy Schmidt and Difficult People, but also stepping up to the plate to rescue beloved TV shows that were cancelled too soon, like The Mindy Project. However, rebooting shows from decades ago—Twin Peaks, The X-Files, Full House, Boy Meets World, and, most recently, The Fresh Prince of Bel-Air—is a whole other story.

In Josef Adalian’s Vulture essay on TV remakes, he interviews an anonymous television insider who explains, “There’s so much product, it’s hard [for something new] to stand out.” So it makes sense that networks are bringing back what’s recognizable, especially with the unprecedented popularity of television-themed listicles and quizzes online. These reboots are a good investment for the network. There’s no need to market; they sell themselves.

Arrested Development was one of the first of many shows to be rebooted, back in 2013. I had a visceral sense that watching season 4 would somehow lessen my adoration for the first three seasons, and that revamping a show that originally aired in 2003 wouldn’t quite translate, especially since its brilliant commentary on the George W. Bush era was central to the charm.

I was reminded of Buffy the Vampire Slayer’s sixth season, where—spoiler alert—Buffy’s friends resurrect her from the dead, assuming that she is suffering in the depths of hell. Buffy has a hard time readjusting to hellish Sunnydale, and she eventually reveals that her friends pulled her out of heaven, where she was finally at peace. Sure, Buffy’s life was cut short (she sacrificed herself at the end of season 5 to prevent the apocalypse), but bringing her back did far more harm than good.

Arrested Development and other reboots are Buffy. They shouldn’t have died, but now it’s just too late to bring them back.

Using this analogy, Arrested Development and other reboots are Buffy. They shouldn’t have died, but now it’s just too late to bring them back. If we let shows like Arrested Development stay in TV heaven, we can comfortably reminisce about their glory days. When we give them another life, it changes the way we interpret the original series. As we saw with Go Set a Watchman, the belated sequel can damage our view of the original.

Of course, most of these revivals are still in development, so we have yet to find out whether our favorite TV shows will be forever altered for better or for worse. Regardless, they take away the magic of speculation. One of the reasons we idealistically (and perhaps indulgently) reminisce about shows like Freaks and Geeks or (pre-Netflix) Arrested Development is because their runs were cut short. That’s not to say they aren’t deserving of praise, but we didn’t have to endure any dip in quality or take issue with weird character developments. We never saw our favorite characters leave (or get killed off) because the actors decided to move on. We saw them only at their best. The aforementioned shows are lauded, in part, because they were canceled too soon. Plus, everybody likes an underdog.

Then there are shows rebooted with a different cast. The Carrie Diaries—a prequel to Sex and the City, set in the 1980s—aired on the CW from 2013-2014. In Matt Zoller Seitz’s review he writes, “The problem is that The Carrie Diaries is an inept spinoff that dishonors its source. … Everything about it is wrong, starting with the venue, the CW, a commercial broadcast network whose content restrictions guarantee we’ll never… hear about the sort of misadventures that turned Sarah Jessica Parker’s Carrie into a… sex [columnist].”

That’s the downside of the easy marketability of the TV reboot/spinoff/revival. It is inevitably compared to—but seldom lives up to—the spirit of the original. Perhaps The Carrie Diaries would have lasted more than two seasons had its protagonist not been a younger version of such an iconic character. Carrie Bradshaw is deeply embedded in our cultural consciousness; women identify as her, and any other representation is bound to disappoint.

Of course, there’s a laundry list of contemporary reboots, revivals, and (especially) spinoffs that have been successful. Fargo, for example, works in part because of how much it deviates from the original—the movie is a mere jumping-off point. Battlestar Galactica is a rare case where the reboot is more beloved than the original. The fundamental difference between The Carrie Diaries, Fargo, and Battlestar Galactica and shows like Arrested Development, The X-Files, and Twin Peaks is that the latter group’s revival was fueled by online fan momentum. Part of the success of Fargo and Battlestar Galactica is due to the fact that no one asked for it; it’s easier to do well when there’s not a lot of hype to live up to.

Wet Hot American Summer: First Day of Camp, a revival of the 2001 cult classic, was recently released as a series on Netflix. It has been well-reviewed—with some critics lauding it as better than the original—but it’s important to acknowledge how much context can influence our perception of the series. As Brian Moylan points out in his review for The Guardian, “When WHAS arrived in theaters in 2001 the only really recognizable cast members were David Hyde Pierce—who was starring in Frasier at the time—and the alumni from MTV’s too-short-lived sketch comedy program The State.” It’s fun to watch the series’ celebrity cameos, because it’s funny to see a cast of excellent middle-aged comedians play horny teenagers. Emily Yoshida writes in her review for the Verge: “If you’re a diehard, it will play out like a fan-fic stranger and more elaborate than anything even in the furthest reaches of Tumblr.”

That is how I anticipate the Twin Peaks and X-Files revivals will turn out: They’ll read as excellent fanfiction. A show like The X-Files is a reflection of the ‘90s and isn’t particularly relevant in 2015. And with Twin Peaks’ disappointing second season, I can’t imagine its reboot delivering the same vibe and quality as the original, even with David Lynch directing.

Of course, many of these revivals are in development because we asked for it. Fans will be into it because it’ll be fun to see Scully and Mulder together again. We’ll indulge in the Full House revival because it’ll be fun to see how Kimmy Gibbler aged and what actors they choose to play DJ’s kids. (And it’s already become a widely shared meme!) I have faith that even though the Internet continues to buzz with excitement, fans will acknowledge that these revivals cannot compare to the originals.

Let the shows of the past rest peacefully in TV heaven, and live on in our fanblogs, fanfiction, listicles, and memes. If fans are that thirsty, perhaps television executives should look to Larry David’s brilliant Seinfeld reunion plotline in the seventh season of Curb Your Enthusiasm. We got to see the cast of Seinfeld back together, behind the scenes, making a terrible reunion show. We got a glimpse of what it would be, and then we could be glad it never happened.

Photo via Robert Couse-Baker/Flickr (CC BY 2.0) | Remix by Jason Reed