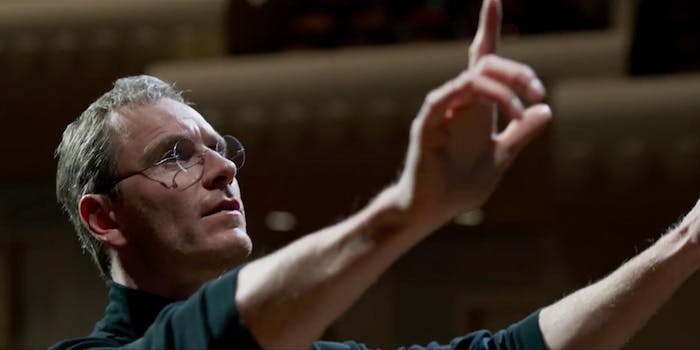 He's better than Ashton Kutcher, that's for sure.

The newest trailer for the Aaron Sorkin-penned biopic, which was released on Wednesday, suggests that the answer is yes.

Christian Bale was originally supposed to play the titular role, but he backed out of the deal after realizing he “was not right for the part,” and it eventually went to Fassbender, who also looked nothing like the Apple founder. Last May, Universal Pictures released a short preview of the film, but it didn’t really offer much insight into Fassbender’s ability to channel Jobs.

This trailer, though, includes scenes of him actually speaking and acting, along with a peek at Seth Rogen as Steve Wozniak, Kate Winslet as the former head of Macintosh marketing Joanna Hoffman, and Jeff Daniels as John Sculley, the CEO of Apple during Jobs’ short exile from the company.

Given Sorkin’s knack for compelling dialogue and Danny Boyle’s direction, the film stands a chance at fulfilling its implicit promise to do justice to Walter Isaacson’s biography, on which it is based, and to Jobs’ colorful life itself.

Honestly, though, anything that erases the memory of the Ashton Kutcher version is welcome at this point.

Steve Jobs is set to be released on October 9.