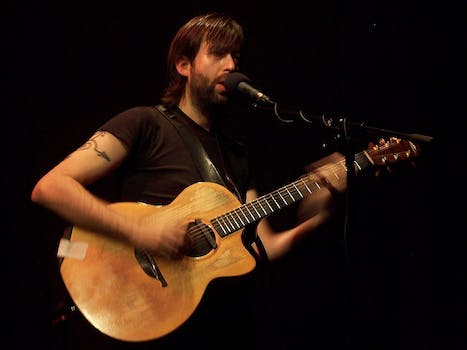 After receiving a shout-out on Twitter from the English actor, singer-songwriter Jon Gomm's YouTube video has been viewed more 1 million times.

Can a a single tweet change a stranger’s life? Perhaps if it comes from Stephen Fry.

The venerable English actor, who has 3.8 million followers on Twitter, has given singer-songwriter Jon Gomm an enormous career boost after tweeting a YouTube link with the hashtag #jongomm and a one-word exclamation: “Wow.”

In the video for his single “Passionflower,” Gomm utilizes just about every conceivable part of the guitar to create a haunting and memorable acoustic song, sounding like a dream collaboration between John Fahey and Nick Drake.  He creates eerie tones by retuning the strings mid-song and uses the guitar’s body for percussion.

Gomm, who describes himself as a “independent, non-corporate musician,” is used to crashing on his friends’ couches while travelling around and playing shows. Since Fry sent that fateful tweet on Jan. 19, Gomm, 35, has seen his career take off in a big way.

He’s now scheduled to appear on national TV shows in Holland, Turkey, and Portugal, while he’s gearing up to tour Australia and the U.K. On Thursday morning, he made an appearance on the BBC’s Breakfast show in the U.K.

“My previous life—of driving from my home in Leeds to Vienna to play a concert—has suddenly changed dramatically,” Gomm told the Daily Mail. “It’s been crazy, but I felt lucky enough before, just being able to make my living as a musician, so anything more is a bonus.”

Between the video that has shot him to stardom and other tracks such as his unorthodox cover of the Police’s “Message In A Bottle,” it’s clear Gomm has the talent to turn YouTube notoreity into a long-term career.