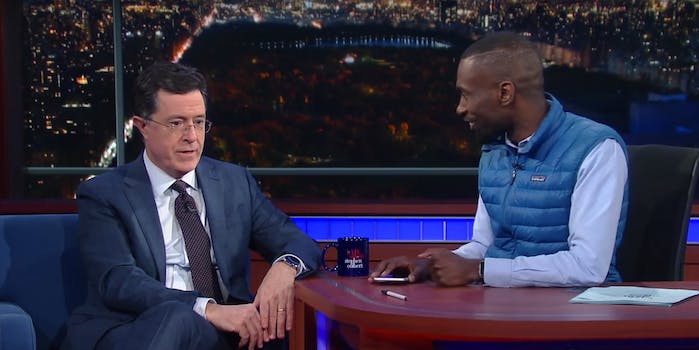 If only all conversations about race could be as open and honest as this one.

DeRay McKesson, one of the leaders of the Black Lives Matter movement, stopped by The Late Show on Martin Luther King Day to talk about Project Zero, which is pushing to end police violence in the U.S. And he even showed Stephen Colbert how to check his privilege.

On one of his earliest shows, Colbert donned a Black Lives Matter wristband at the request of one of his audience members, but even he wasn’t expecting the reaction that provoked. McKesson explained the misconceptions of Black Lives Matter, why saying “All Lives Matter” was just a distraction, why police officers needed to be held to a different level of accountability, and how social-justice campaigns have evolved with the help of technology.

But after talking with McKesson, Colbert wanted to acknowledge his white privilege, so he gave up his host seat to his guest, who then asked him the tough questions about race. Those are baby steps.