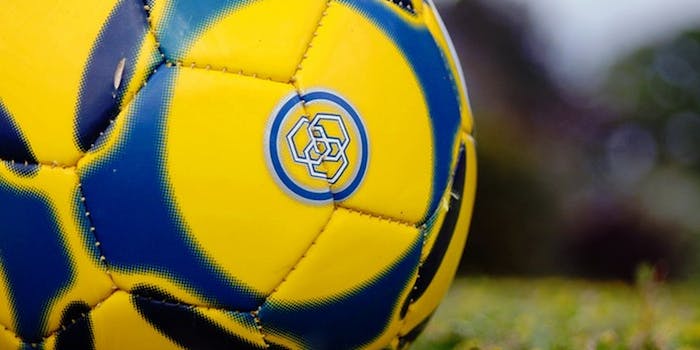 Does the fact it's "just women's soccer" make this three-touch goal any less extraordinary?

The FIFA goal of the year competition includes plenty of jawdroppers from the last 12 months in international football, like Zlatan Ibrahimovich’s over-the-shoulder miracle and Hisato Sato’s thriling spin-and-volley.

But one video on the list is garnering underdog status, and plenty of controversy: YouTube footage of Irish amateur league footballer Stephanie Roche making a goal for her team, Peamount United, last year.

Roche’s goal certainly isn’t as dramatic as the goal FIFA fans voted for in 2013. That goal, also by Ibrahimovich, took place in a pro stadium in front of thousands of fans. Roche’s goal, on the other hand, went instantly viral, racking up 2.5 million views since last October—but it happened in a low-key game for Peamount United against their rivals the Wexford Youths.

If these aren’t teams you’re familiar with, it’s because they’re part of the Women’s National League of Ireland, which has only existed for three years. The league has just seven teams, and one team had to drop out due to a lack of players. In 2011, the first year of the league’s existence, Roche was the league’s top scorer. The Dublin native, who is also a striker for Ireland’s national team, scored 24 goals made throughout the year.

And it’s easy to see why. Roche has amazing “tekkers,” which is soccer slang for superb technique and absolute control of the ball. There’s no other way to explain how she started this shot facing the opposite direction yet somehow managed to drive it straight into the net after only three touches—for a 20-yard goal.

While other year-end polls may be garnering controversy for driving hate speech towards women, the FIFA vote has turned into an unexpected boost for the visibiltiy of female athletes:

Currently, Roche plays in France for the ASPTT Albi women’s football team. In a statement, she said she was “absolutely delighted” by the news.

“Obviously, it was a big surprise but it is a great boost, not only for myself, but for women’s football and particularly the Women’s National League. It’s a great feeling to see myself on the list.”

Of course, since this is the Internet, it’s easy to find disgruntled soccer fans complaining that Roche is only there because of her gender, and that the amateur leagues don’t deserve to be in consideration for top awards alongside the pro leagues.

But it’s hard to argue too bitterly against a goal that clean. Most people just seem to be happy that Roche has been nominated.

With all the hits women have taken from the Internet lately, it’s nice to be reminded that women can kick back—and score.