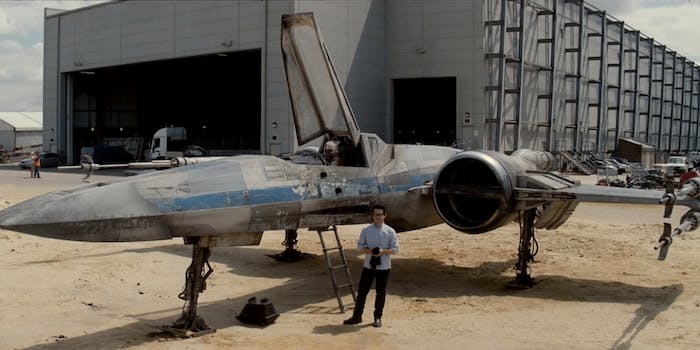 It never rains but it pours: There’s an overload of Star Wars news going on today. Firstly, a respected film blog has got its hands on extensive (unverified) details of the plot of Star Wars Episode VII, and a video publicizing a charity initiative offering fans the chance to appear in the upcoming blockbuster has given us our first official look at an X-Wing from the movie.

Scroll down for the video.

Using broad strokes, writer Devin Faraci sketches out the synopsis of the hotly anticipated sequel, from its opening scenes through to a quest to find a missing character and an emerging evil building a superweapon.

“Imagine the standard Star Wars crawl, and when it ends the camera pans up to the stars. But instead of a spaceship zooming into frame we see… a hand! A severed hand, tumbling through space. A severed hand gripping a light saber.”

The hand is subsequently discovered by actors Daisy Ridley and John Boyega—slated to play leading roles in the upcoming trilogy—and they determine to return the lighsaber to wherever it came.

The hand is of course Luke Skywalker’s, lost in The Empire Strikes Back decades before. The duo manage to find Han Solo and Chewbacca (“who aren’t flying around in the Millennium Falcon anymore but are piloting… well, that could be a spoiler”)—but alas: “they say they haven’t seen their friend in thirty years, since the events of Return of the Jedi.”

Meanwhile, as the gang begin their search for the missing Jedi, “on an ice planet nefarious forces are building a super weapon, one capable of destroying not planets but entire solar systems…”

Badass Digest also reports positive news about the actors: “again and again I’m hearing that John Boyega owns this movie.” It’s unclear where the leak has come from, whether a stolen script, a loose-lipped production assistant, or some other unnamed source. The film has already been plagued by leaks and on-set photographs, forcing director J.J. Abrams to take to Twitter to plead for calm, and some fans have taken it a step further by creating their own—fake—leaks.

Reaction on social media to the new leak, meanwhile, has ranged dramatically, from displeased to rejoicing:

@fifisexorama What happens after the opening crawl… would be amazing I think if true… http://t.co/NPU6YoXWil

This is fake and so scientifically retarded if true, a new SW high http://t.co/wVKBAAfps1

Next up: A video released by Abrams on the official Star Wars YouTube channel publicizing a charity initiative has officially confirmed the inclusion of X-Wing fighters in the forthcoming film—something that had previously been teased in photos leaked to TMZ that appeared to show an unfinished model.

The video—raising money for UNICEF by promoting the chance to feature in the film and win an advance screening in the winner’s hometown—also shows off a MSE-6 mousedroid. As of July 21, there’s four days left in which to enter the competition.

Star Wars Episode VII has yet to receive an official title (though Badass Digest is unofficially calling it Star Wars: The Hand Of Skywalker), and is believed to be on schedule for a December 2015 release—ahead of which it has stoked controversy amongst fans by nuking the entire extended universe.

The film is also set to star faces both new and old. Fresh blood is being injected into the franchise in the form of Oscar-winning Lupita Nyong’o and Game of Thrones star Gwendoline Christie, whilst Mark Hamill and Harrison Ford are also set to reprise their roles (with the latter sustaining an injury on set delaying filming for weeks).

In addition to the new trilogy, there are at least three more confirmed Star Wars spinoff movies on the way.