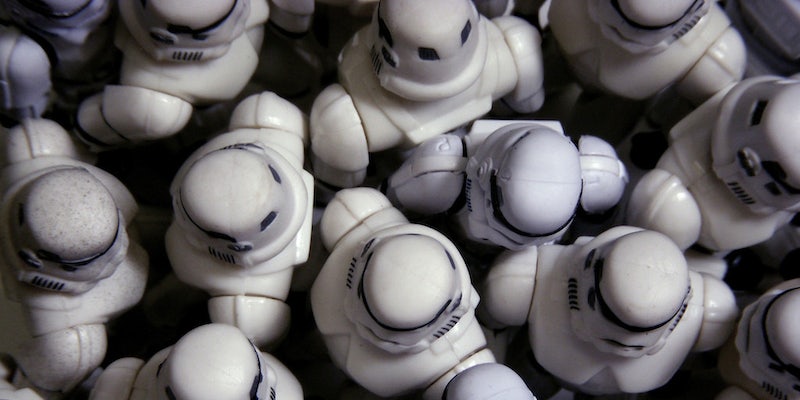 These are the ‘Star Wars: Episode VII’ photos you’re looking for

Fans get a first look at filming on the first day of principal photography.

Whether we like it or not, principal photography for Star Wars: Episode VII has officially started.

Bad Robot, J.J. Abrams’s production company, shared a photo of the clapboard being used for the new Star Wars film on Twitter to signify the first day of filming.

There’s not much revealed from the picture. There’s no set, a glimpse at any of the stars, both old or new—or any hint of who’s playing that second female character promised by producers after fan backlash over the lack of women in the cast. The main thing to take from it are the names of Abrams and his cinematographer, Dan Mindel, displayed on the slate and what filter is being used.

But, as one of the most highly anticipated films of 2015 and tight security, that’s not really a surprise. It’s certainly no Sad Batman or Mockingjay in terms of first reveals.

However, keen filmmakers have already found plenty to speculate in that lone photo. After looking at the clapboard, Joseph Kahn theorized that the very first shot might be one involving visual effects.

My read on STAR WARS 7 slate: ND 6 bringing down two stops to a 5.6 stop. Probably long anamorphic lens on close up. pic.twitter.com/9cLLOEUOdl

You don’t usually write all that camera info on a slate. I mistook Al40 as A roll 40 instead of Primo 40mm. Definitely visual effects shot.

The Star Wars Facebook page also offered its own photo for fans, but it’s just as frustratingly vague as the first one. However, it does reveal where today’s shoot is located.

Disney had previously announced that filming for Episode VII would start in May. A report from Abu Dhabi’s The National regarding filming suggests that the film might be going back to Tatooine, the planet where Luke Skywalker grew up.