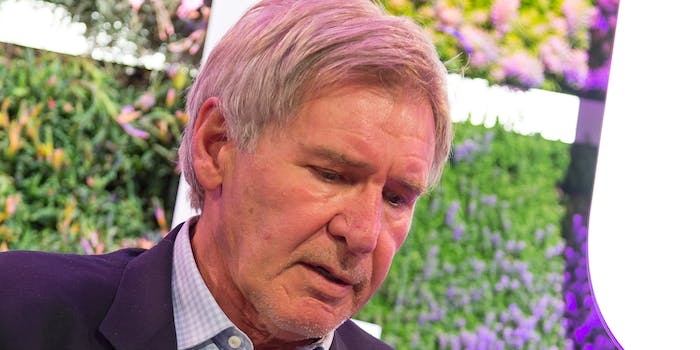 At 71, Harrison Ford is a little old for action roles, even in this era of never-ending Die Hard sequels.

After just a couple of weeks of filming, the new Star Wars movie has had its first casualty: Han Solo.

According to The Hollywood Reporter, Harrison Ford was airlifted to a hospital on Thursday afternoon after being injured by a door on the Millennium Falcon.

The Mirror reports that the injury was sustained while Ford was performing a stunt onboard the Millennium Falcon set. Filming was taking place at England’s Pinewood Studios, and Ford was flown to a hospital in nearby Oxford. A Star Wars spokesperson said that shooting will continue as planned while he recuperates.

At 71, Harrison Ford is a little old for action roles, even in this era of never-ending Die Hard sequels and vintage action stars teaming up for retirement-age fistfights in The Expendables. Still, Ford has said relatively recently that another Indiana Jones movie isn’t out of the question, and last month he was publicly asked to reprise his role in a Blade Runner sequel.

Here’s hoping that he recovers quickly, and that this accident doesn’t put a dent in his enthusiasm for Han Solo’s return to the Falcon.