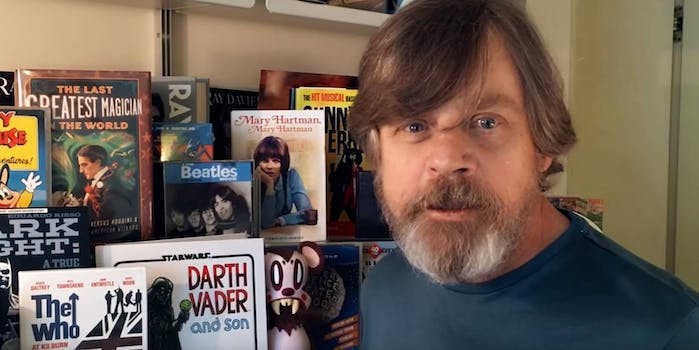 'Collectibles are a living history of who and what we are,' Hamill said.

Comic-Con HQ, the new subscription video on-demand (SVOD) service from Comic-Con and Lionsgate, has announced an original series that will excite Star Wars fans. It’s called Mark Hamill’s Pop Culture Quest, and it will star the titular actor as he tracks down collectors and discusses their passions with them.

Hamill, best known for portraying Star Wars hero Luke Skywalker, is himself a big geek and an avid collection. On his journey to find kindred spirits, he’ll team up with Howard Kazanjian, best known as the producer of Return of the Jedi.

“I’ve been a collector all my life,” said Hamill in a press release. “This show is a natural outgrowth of that passion. Now I have an opportunity to collect other people’s collections! I can’t wait to see what’s out there and share it with the world. Collectibles are a living history of who and what we are, so we just might learn something…but there’s no doubt we’re going to have fun!”

Comic-Con HQ, which is currently in beta after more than a year in development, is catering to pop culture nerds with an intriguing collection of original programs. Among other offerings, it will also distribute Con Man, which raised big money on Indiegogo last year.

Pop Culture Quest will begin filming in June. It is expected to arrive sometime in the fall.