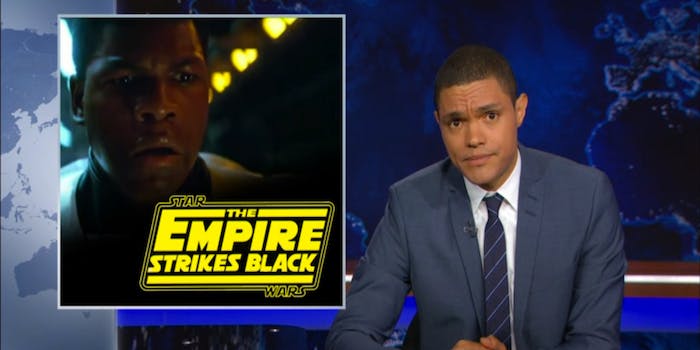 Crashing ticket sites was the least of our problems.

We finally got the full Star Wars: The Force Awakens trailer Monday night, but having to sit through two hours of football to get it may have been the least of our problems.

Although trolls started #BoycottStarWarsVII leading up to the trailer, it prompted The Force Awakens director J.J. Abrams to respond with a heartfelt message of his own: he doesn’t care what race or species you are, he just hopes you enjoy it.

To Noah, the note also captured the backlash that appeared last year when racists complained that there was a black stormtrooper in a Star Wars film (John Boyega’s Finn). Then there is the blowback from mostly white men when any movie tries to present a hero or character that’s anything other than a white man. As Noah explained, it happened with The Hunger Games’s Rue, with Miles Morales’s Spider-Man, and with Michael B. Jordan as the Human Torch in the Fantastic Four reboot.

And besides, most fans don’t even have a problem with more diversity in Star Wars. They have more important and inane things to worry about—like the Expanded Universe no longer being canon, whether costumes should have nipples on them, and what happened to fan-favorite Boba Fett. As it should be.