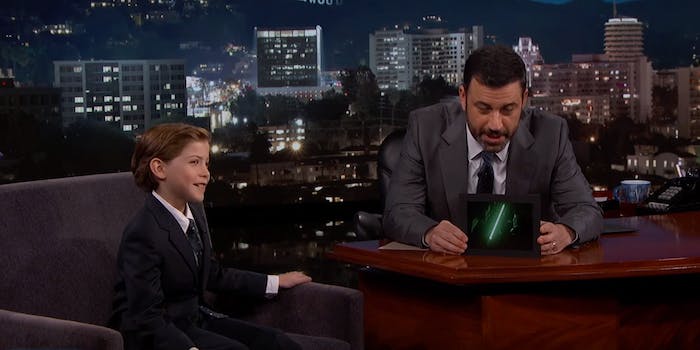 Isaac charmed one of his biggest fans.

Jacob Tremblay, the 9-year-old star of Room, got to meet his hero after the Golden Globes—and he didn’t even have to travel to a galaxy far, far away to do it.

Tremblay, a huge Star Wars fan, told Jimmy Kimmel that one of the highlights of his night was meeting Oscar Isaac, a new Golden Globe winner and the face of ace Resistance pilot Poe Dameron in The Force Awakens. For one, he got to show him his lightsaber, captured in the now-famous photo posted on production company A24’s Twitter account.

oh no oh no Oscar Isaac and Jacob Tremblay had a Jedi battle at the #GoldenGlobes after-party. dreams do come true. pic.twitter.com/hDSaPI7z0v

But he also had plenty of questions. Not necessarily about Star Wars itself, but about the experience of it—particularly seeing your face on everything from action figures to yogurt containers.

With that attitude, Tremblay will be more than prepared for a future superhero movie role.