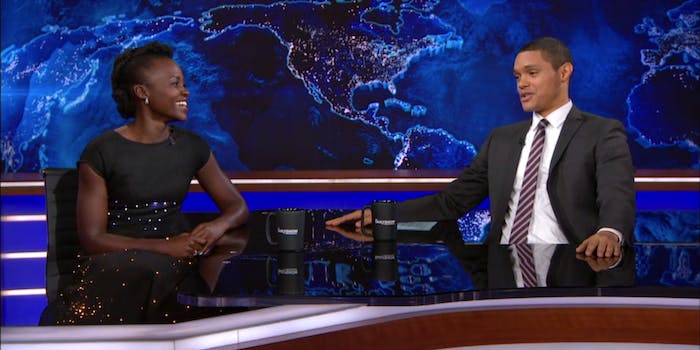 She can't say much about the film, but we're hanging onto her every word.

This articles features a video that will autoplay.

Lupita Nyong’o may not have been allowed to reveal anything new about Star Wars: The Force Awakens on The Daily Show, but she still demonstrated her Star Wars fandom, discussed her CGI filming experience, and shared her love of fashion that will help inspire the next generation.

Even though we already know what Maz Kanata looks like and how she sounds from the poster and trailers—and even though the movie is practically within our grasp—Lucasfilm maintains a tight, Marvel-like grip on its stars and their secrets. But Nyong’o and Trevor Noah still managed to find some common ground by chatting about her CGI filming and the saga as a whole. She watched the Star Wars films on TV during public holidays, so she associated it with getting out of school.

One thing Noah couldn’t help but notice was her dress, which was made with LED lights. It wasn’t just a fashion choice, but rather part of Zac Posen’s collaboration with Google to encourage girls to code through fashion. The dress would likely fit right in with the Star Wars universe.