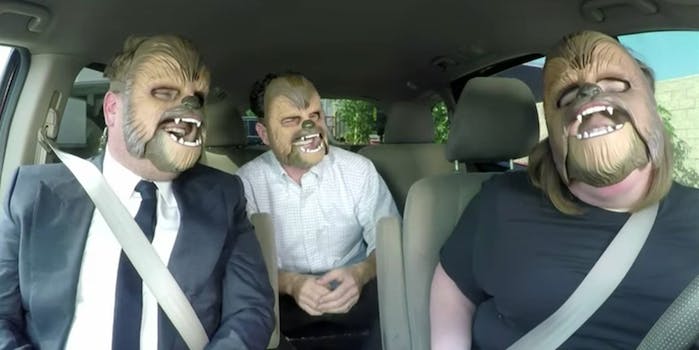 It's been a whirlwind for Candace Payne the past few days.

Last week, Candace Payne took the world by storm by filming her utter joy at unboxing and wearing a roaring Chewbacca mask. Since then, she’s broken a Facebook Live record and received a bunch of free stuff from Kohl’s, and she’s now making the talk-show rounds with a little help from a new friend.

Because sure, donning a Chewbacca mask is totally something James Corden would do in the name of television and a viral video, but who would have thought we’d see J.J. Abrams put one on just as eagerly?

Payne later told Corden about the whirlwind experience of going viral, while Corden showed the moment when Payne met Abrams and received a heartwarming message from Chewbacca actor Peter Mayhew. After calling her an inspiration, he had an even bigger surprise for her.