Star Trek fandom’s theories on the “Into Darkness” trailer

From Benedict Cumberbatch's character to hand identification and Avengers crossovers, Star Trek fandom has seen it all lately.

When audiences are due to receive new installments in the Iron Man, Thor, Superman, and Hobbit franchises in a single 12-month period, it should be difficult to pick any one fandom as the biggest of the year. But Star Trek, as ever, seems primed to be the juggernaut that leaves other fandoms in the dust.

Last month, the first trailers for Star Trek Into Darkness (yes, there really is no colon in the title, to the loud annoyance of many fans) were released online. Since then, everyone from old-school Trekkies to the Tumblr generation of Benedict Cumberbatch enthusiasts have been picking apart every available scrap of information for clues. To give you an example of the kind of dedication we’re dealing with here, it took less than 24 hours for a hidden viral marketing site titled “Are you the 1701?” to be discovered from split-second trailer screenshots.

But despite the first 9 minutes of the movie being leaked onto the Internet, viewers are none the wiser about most main plot details. Chief among Star Trek Into Darkness’ many mysteries is the identity of Benedict Cumberbatch’s character. So far it has only been revealed that his name is John Harrison and that he is, according to director J.J. Abrams, “an average guy”—a statement that seems rather contradictory when put side-by-side with the official description of the Into Darkness’ villain as “a one-man weapon of mass destruction”.

Some fans were quick to point out that “John Harrison” is a kind of John Doe for the Star Trek universe, a name given to a background character in the original series who was little more than an extra and who played the role of several different crewmembers throughout the series’ run. For this reason, there are still multiple theories as to John Harrison’s “real” identity. One of the most popular suggestions is Gary Mitchell, a character who appeared in the Original Series pilot episode. This comparison is mainly down to the visual similarities between the first promotional still from Into Darkness and shots of the imprisoned Gary Mitchell from the Original Series: 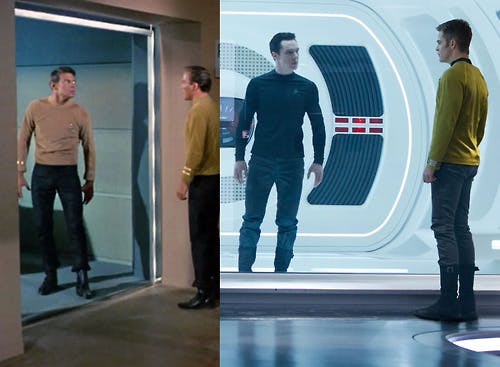 Other comparisons include Tom Hiddleston, whose unexpected appearance on the Star Trek tags may partly be attributed to Tumblr’s eternal love of the Avengers actor. The same screencap that made some fans think of Gary Mitchell caused others to recall one scene in The Avengers when Tom Hiddleston’s character Loki was locked in a glass cage. Perhaps inevitably, there is already Loki/John Harrison fanart making the rounds. 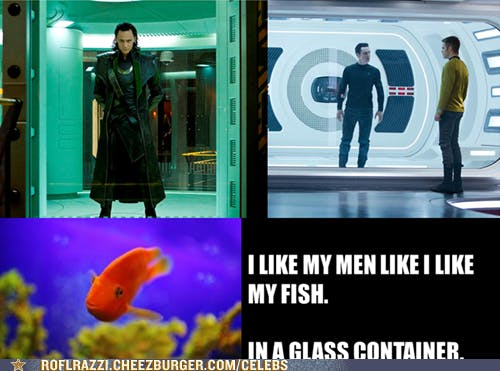 Comparisons to the classic Star Trek villain Khan Noonien Singh have been rife since before Benedict Cumberbatch had even been cast. While any suggestions that Cumberbatch is Khan have been so far been ignored or deflected by official Star Trek sources, the Japanese version of the Into Darkness trailer includes a few seconds of extra footage which closely mirror an iconic scene from The Wrath of Khan. This scene is particularly important to the legions of Kirk/Spock shippers among the Star Trek fanbase, as it shows Spock sacrificing his life for the crew of the enterprise as Kirk looks on from the other side of a pane of glass.

Kirk/Spock fans immediately began to suggest reasons why this might not be Kirk and Spock after all, but these theories have since been debunked by such enterprising folk as fanartist astsadi. Astsadi put together a multi-part infographic illustrating just why it must be Spock and Kirk’s hands in the scene, including multiple visual references to the actors’ hands and body-language. With this kind of dedication on show already, we can only guess what will happen once Star Trek Into Darkness has actually been released.

And if all the John Harrison theories do turn out to be false, there’s always the possibility that he was Sherlock Holmes all along.