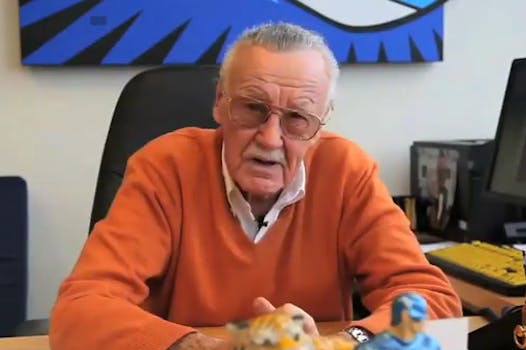 The mighty Marvel icon kicked off his official YouTube channel at Comic-Con with a lineup of five shows. 'Nuff said!

YouTube’s slate of premium channels is getting rescued by a group of well-known superheroes.

“What we are giving you is such a gift, such a wonderful thing, I don’t think we should have to pay taxes,” Lee humbly said at the launch, according to Reuters. “Could you speak to somebody about that?”

The channel is a mix of scripted and reality-based programs with five shows premiering at launch. New shows will release each weekday and new series will be gradually debut throughout the year.

Shows include “Fan Wars,” where over-enthusiastic fans debate comic book heroes in a faux courtroom setting. The show is hosted by former America’s Next Top Model winner and notorious geek Adrianne Curry, who said the show will do the unthinkable task of scouring the country for superhero superfans.

Other programs include a news-centric show called “Mask and Cape,” a crafting show titled “Geek DIY,” and two shows starring Lee himself. In “Stan’s Rants,” a puppet version of Lee rants about anything, and Lee talks with other comic book icons in an interview-based show called “Cocktails with Stan.”

This all sounds well and great, until DC decides to follow it up with “Real Housewives of Gotham.”