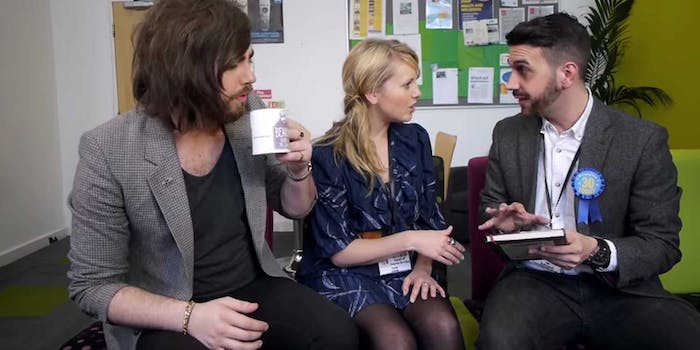 See teachers as you've never seen them before.

When you think about the people you know who became teachers, you may shudder just little, especially if they weren’t the judicious, level-headed, authority-minded kind of people that you’d want to see guiding your children through a crucial stage of their development. In some cases, your teacher friends may be people you wouldn’t trust with your plants while you were away.

But as long as you’re friends with one teacher, you’ll undoubtedly think back on the stern, stentorian figures who were instrumental in your own development. You’ll ask yourself: Was this what your teachers were like when they were younger?

A new British webseries called Staff Room won’t answer all your questions about teachers, but its depiction of them—swimming in career uncertainty, booze, and relationship failure—will make you want to hop in a time machine, set it for high school, and snoop around the faculty lounge for gossip.

Staff Room, written and directed by its two stars, Adam Brown and Ryan McDermott, is hardly revelatory in its premise, nor is it particularly funny. Sure, there are some deft call-backs, but these are cancelled out by a glut of predictable punchlines. Yet to its credit, Staff Room brings in Brian Capron to play the principal. Capron is best known in Britain for playing a serial killer on EastEnders, and he brings an infectiously pleasing ignorance to the job of school principal.

What’s interesting about Staff Room is that the schoolchildren for whom everyone toils are never spoken of, let alone seen. Kids often imagine that following each class period, their teachers leave the classroom and retreat to the break room to talk about their students. What else, frankly, would they have to talk about? Kids see teachers as remarkably boring people who have only their students as common ground. But the teachers from Staff Room have relationships—however dysfunctional—and they treat their profession as a regular job rather than the undeniable calling that some people suggest teaching to be.

That this version of teachers never occurs to so many students says a lot about our younger, self-obsessed selves. Only after watching this series do things like math teachers retreating to the computer room begin to make sense. If Staff Room is to be believed, below the guarded professional guises lurk a seething tangle of immorality. It’s enough to make one feel sad about missing it all.

Despite all this, Staff Room isn’t the comedy that it wants to be. It’s hard enough to get noticed when your writing is razor sharp. This series raises a host of interesting questions about our childhoods, but thanks to its tired dialog and flat acting, it mostly inspires apathy.